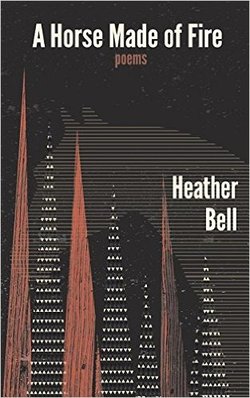 
I ask a lot of people about death, as if their death stories may
negate my own.
—“What to Do If Someone You Love Is Dead”

What do you do when someone you love is dead? What do you do if that someone is your unborn baby? And if that someone is really someones? Heather Bell's newest volume, A Horse Made of Fire, is a mother's book of answers to her own personal questions about grief, finding solace in marriage, and the complicated joys of young motherhood. A Horse Made of Fire picks up where Bell's earlier collection, the self-published Expletive Deleted--an unbridled collection which danced around the topics of stillbirth and grief, and their affects on a young marriage—left off. Almost literally. Bell's last volume ended, “'Maybe,' she says [to her husband],/which isn't really an answer and isn't/really the end.”

Bell quickly begins asking and, more explicitly than her previous collection, answering. In “Lost,” a would-be-mother is found by her husband:

...sitting in the backyard. I say,
“I lost the baby.” I tell him I have been
putting up flyers all afternoon as if I lost
a Llasa Apso.

Her flier, placed next to the picture of a missing girl—found dead the previous week—reads:

LOST: heart in the shape of a
peony. Small, inconsequential.
Might be in your backyard pool.
Might be doing the dead man's float.

But it's neither the mother's grief nor her denial at the center of “Lost.”  It, like much of the book, is a love story about a couple surviving repeated grief and answering, how do you find each other again?:

With a sense of history, my husband
touches me, pulls me back inside
and into the bedroom, to our
sickbed.

Chillingly, the discussion in “Conversation with Allison” follows shortly as a cautionary tale; the message between the lines clear, when I go, I'm gone:

“It just was what it was,” she said.
I had not disappeared or
floated off with a million other small leaves,

but that was how it seemed to my husband
at the time.

And you know, she told me, you could
not have found me on a map
once I was gone.

But the terrible magic of Bell's A Horse Made of Fire is not its heartbreaking themes, but in Bell's juxtaposition of these themes with her unreliable narrator. As with most Bell poems, which cannot be read in any literal sense, we know that the shoes in “Funeral Shoes” are not really “human-skin lined” as she proposes (nor is it likely that they are “otter- or beaver-skin lined” as she also suggests) and certainly there are no “nightmares stitched into the toe.” Instead, these barbaric and borderline preposterous leathers frame the picture of a would-be-mother who in her grief asks:

Is this the way I am sorry feels
to most animals? Sealskin at the tip, a little blood still
around the ankle.

We can add to Bell's list of questions: What do you do when you feel like you've murdered your unborn child? Add to her answers, “Decoding the Poem”:

And there you place moodiness and there
you set grief, just as we did,

at the kitchen table
after you lost the baby. And there it is again--
December...

and this door is a hole
or wound that you walk through.

Bell offers many answers to “how does a woman or a young marriage survive?” In “And If You Are Sad Enough” a woman baskets her grief, her “rage,” and her “beautiful piano/and translated pig's/heart,” and much like a perverse biblical character, offers it to the river:

if you are sad enough,
you will hear it cry, quietly,
and suck greedily
on its fingers.

If you are sad enough, Bell answers, you will invent a baby. Or, perhaps, if you're lucky enough, your baby will be made real. In “In The Clinic Parking Lot,” Bell's young mother offers to her embryo, “this world is absurd/and enormous and/welcome.” Later, she elaborates by answering “What Do I Teach My Daughter About Poetry” ?:

That it was violent? That it was a noose? That at seven
months pregnant with her, I had given it up because I was
so terrified of the change in the wind that always comes

with a new poem?

A startling read full of questions, and offering some answers, A Horse Made of Fire appeals to a new audience. Old fans will be reassured by Bell's continued use of strong, female-centric narrators, and often quirky use of language. The same accessible and surprisingly vivid imagery which trademarked her earlier work is sharpened in A Horse Made of Fire. Likewise, Bell's regression to earlier topics is a delight rather than a bore—in her new collection, Bell has pulled back the veil and stands more focused, more poignant, and with the benefit of hindsight earned the hard way by a narrator who now knows “that rage was not my happiness backwards.” 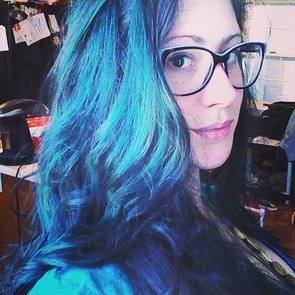 Heather Bell lives in Oswego, NY, where she writes and mothers two small warriors. Her work has been nominated for the 2009, 2010 and 2011 Pushcart Prizes, and has appeared in Rattle, Poetry/Artists, and many other publications. Her latest book, A Horse Made of Fire was released in 2015 (Cobalt Press). Bell graduated from SUNY Oswego and has since learned to make her own beer, which is mildly relevant.