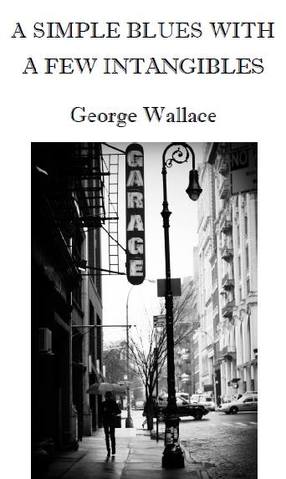 
There is a search for light(ness) in the sprawling decay, open wounds, and “wondering what it is all about” in A Simple Blues with a Few Intangibles by George Wallace.  This book reflects the time that it is being birthed, one of desperate loss, confusion, and dizziness, but also a time where creative expression attempts to (re)connect a disparate populous to the(ir) nerve endings.

George Wallace’s poetry encompasses an unforgiving amount of harmonious noise, that is growled and sung, scratched and dug into the walls of abandoned apartments, while at the same time caressed across the skin.  He is both sensual and violent, infinite and claustrophobic, while keeping his sense of humor intact during painful recollections.  George Wallace has absorbed and archived wisdom from the decades of his personal experience in order to shape a distinct VOICE in this book.  Even though the title states these are “simple blues”, there is nothing simple about the Howlin' Wolf like scream coming from this poet.

In the poem “BROOKLYN 1956”, Wallace opens up one of these wounds and leaves it agape for the reader to enter into the emotional bloodwork of the piece, feeling more like an insider as opposed to an observer:

And momma is crying like a teapot, always crying--
crying herself to sleep crying herself awake crying
herself into ecstasy and misery and frenzy and relief,
over nothing—and me ready to stuff myself into
nothing, which is better than this ravioli machine
you call a family and Jesus, deader than the dead
and something like hell and the overcoat of gloom  (Wallace 11)

The experience of explicit desperation and loss becomes a universal expression, not just a recollection.  The desperation of stanzas like this builds camaraderie between the reader and the writer. Coupled with an almost complete absence of periods, Wallace creates an intense blurring of urgency, which is extremely visceral and expands the single VOICE, into a multifaceted shared VOCAL experience.

All of these factors make for the ease at which one enters and exits the poems.  Obscuring the poetics by eliminating the periods only exaggerates the near psychedelic bombardment for the reader.  You might lose your limbs, your virginity, and your innocence.

One aspect of this book, and the poet himself, that I admire, is the total lack of regret.  In the book’s closing poem “LIKE A PEACH TREE BLOSSOMING IN WINTER RAIN” Wallace makes no apology for the “noise”.  In fact, Wallace calls on the French Surrealist poet Paul Eluard to support the loud scaffolding of the city he has constructed in this book.  In the poem “Absence”, Eluard’s cities are not without vast layers of memory, pain, and ghosts: “O cities memories of cities/cities draped with our desires/cities early and late/cities strong cities intimate stripped of all their makers/their thinkers their phantoms” (Eluard).  Wallace seems to not only call back to Eluard, but he also makes a declaration to the reader that the noise and disturbance that he, as the poet in this city, has created is without regret: “I have never regretted the noise a city makes when it becomes too big/to hold itself in, when the lights turn green and streets come alive, I/mean—when the music trapped inside a city gets to be too much, like/bottled wine, and has come out” (Wallace 69).  Wallace is the city, this city; his body and VOICE are the grinding calls to morning with subway cars tearing up his insides, but he never regrets any of it for a minute.  He is secretive and multitudinous, but bare naked and scarred.  This work is constructed with love and patience, which is complemented by the book itself being hand-sewn.

I recently read that George Wallace’s poetic VOICE was akin to the Beats.  Sure, I get that, but it dilutes the unique perspective of this work, which is of the time and place that it is written.  Wallace is a 21st century poet.  He continues to expand and evolve as a writer and performer.  Much like a city, we cannot begin to contain him in such restrictive comparisons.  Like Walt Whitman says in his famous poem “Song of Myself”, “I am large, I contain multitudes”, and I would finish that line off with the VOICE of George Wallace: “It is a new year, I could blossom out from these walls that bind me yet,/from this jazz that holds me in—it is a new year, I am not done yet” (Wallace 69).  George, we sure hope not. 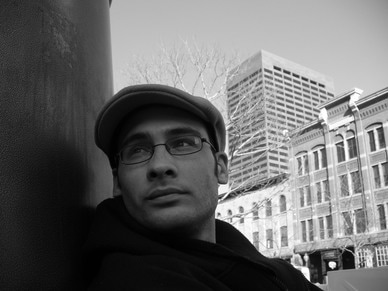 DANIEL DISSINGER is a Kerouac and Beat studies scholar, and a First-Year Writing professor. He has a PhD and MA from Saint John’s University, as well as an MFA graduate of the Jack Kerouac School of Disembodied Poetics at Naropa University.  For six years, Daniel has taught at SUNY College at Old Westbury and has split his time between the English Department and the First Year Department. He has also had the pleasure of teaching at CUNY York, Saint John’s University, and The Harry Van Arsdale Center for Labor Studies.  In 2016, Daniel joined the Writing faculty at USC Dornsife. Daniel is a New York poet who has performed at the Bowery Poetry Club, The Nuyorican Poet’s Café, The New York Poetry Festival, and The Queens Lit Festival and has curated events all throughout the greater New York area.  In 2015, he had the honor of performing at the International Poetry Festival at Bridgewater College.  Daniel’s poetry has been published in a variety of journals such as Monkey Puzzle Magazine, 580 Split (online), the first issue of Trunk of Delirium, and and/or V2, as well as the 2015 anthology Before Passing put out by Great Weather for Media.  In 2013, he was featured as the “Centre Stage Poet” in England’s Decanto Magazine.  His first chapbook, tracing the shape…, was published by Shadow Mountain Press in 2012.