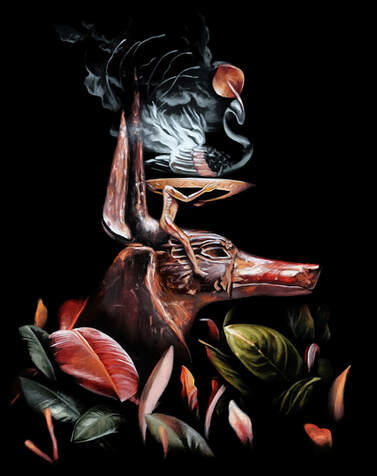 "Rites of the Hunt" by Nam Das

​The waitress behind the counter
asked if there was anything
she could get me, my plate
of eggs mopped with toast,
the orange juice sucked dry
through a straw. I told her, only
inner peace. She didn’t pause,
kept her ballpoint scratching out
my addition. She tore the bill
from her pad. Squared me up
with both eyes. Inner peace
is hard to give, she
tapped her pen
without sarcasm. Her bar cloth
sponged a ring of water
from under my glass. For me,
it’s more like being born
in the wrong century. Something
about 1900 appeals to my nature.
Times were slower, I add.
Simpler. I’m not naive,
she went on. My grandma
worked her ass off. Grandpa
died before I came along.
She turned the water on
at the wash station, began
sinking a load of cups,
saucers, egg plates.
I sure as hell wouldn’t want
to be pumping water
from a well. But all this
having, and not having, she
motioned to 75th Street,
is just too much. The door
opens with the first
lunch traffic. She shows them
the good booth. She clicks
her tongue, points her finger at me
like a loaded pistol. Somewhere,
her grandmother listens
to Jimmy Rodgers, his blue yodel
unwinding on a Victrola,
a wobble of wrens
in the cotton of a curtain.
Al Ortolani’s poetry has appeared in journals such as Rattle, Prairie Schooner, and New Letters. His most recent collection, On the Chicopee Spur, was released from New York Quarterly Books in 2018. He is the Manuscript Editor for Woodley Press in Topeka, Kansas, and has directed a memoir writing project for Vietnam veterans across Kansas in association with the Library of Congress and Humanities Kansas. He is a 2019 recipient of the Rattle Chapbook Series Award.
​Nam Das (Filipino, b. 1989) creates open-ended visual stories by arranging figurative elements into an assemblage forming a central idea, an idea that plays around Jungian archetypes of the collective unconscious or mythologems observed throughout history. He uses a limited palette of four colors in his oil paintings. Also called the Zorn palette, it's composed of: Titanium White, Cadmium Red, Yellow Ochre and Ivory Black. Nam began working as a full-time painter in 2019.