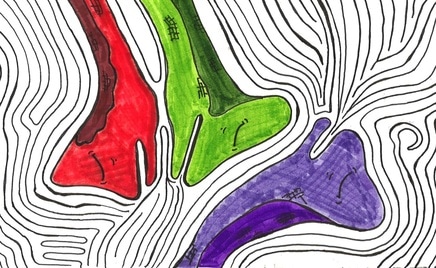 On Fourth of July in the 90’s
I was desperate for a glowstick.
I mean, I knew we were supposed
to be in it for the fire sky, for the
red glare. We all knew, even before
the skyline lost both front teeth.
Floods Hill carpeted in bare legs
and Tupperware and cops mostly
not caring about open containers.

I had a thing for aliens then,
the lemon-lime egghead tapering
to a pointed chin. I was in it for
the genderlessness of their power
and deep space and truth revealed
in cornfields. Wanted three bucks
so I could bite through a fluorescent
necklace and spit light from my insides,
as neon as I knew them to be.
ALICIA MOUNTAIN will begin the creative writing PhD program at the University of Denver this fall. Her work has been published or is forthcoming in Prairie Schooner, Pleiades, Guernica, Witness, Cimarron Review, Spillway, LIT, The Southampton Review and elsewhere. In 2014 she received an Academy of American Poets College Prize and in 2015 an Idyllwild Arts Fellowship.
CONNOR FIEWEGER lives in Chicago, Illinois and currently attends the University of Chicago, where he studies Physics.