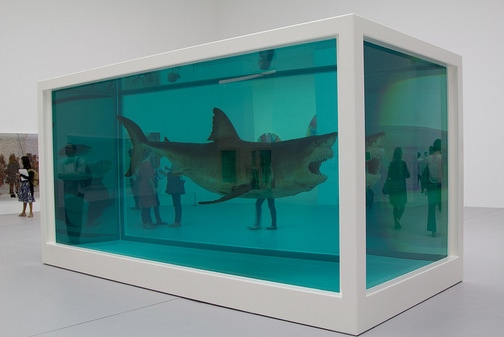 "The Physical Impossibility of Death..." (1991) by Damien Hirst
Big Enough to Eat You

Men are predators, she said,
and boys wear teeth around their neck
until their eyes darken
and enamel points burst from their gums.

I pressed my hands against the glass,
my face level with the beast, swimming
like formaldehyde had seeped between the gaps.

The rot beneath bore no scent,
a room bleached with blinding white,
like menthol to cover up the taste of ash
so we might continue our pretense a little longer.

There was silence,
except for our footsteps.
In the black eye, nothing was reflected.

She spoke again. Everything was suspended
on a fine balance,
the tank beneath her boot spilled
knocking in the room, all bathed in blue.

Teeth or not, all things bleed.

She opened up her mouth to show me,
and there they gleamed, neat and white
in the artificial light.

You know a corpse when you see it,
everything is without tension.
Slack. My knees touched the floor,
skin on enamel, skin on glass.

It’s all just chemicals, she laughed,
and where the hard science finds a gap, a hole,
the soft can bridge it, fill it in.

These systems anticipate all things,
each chain predictable:
Do what you will do next.
Instinct is saying yes.

Art is a fear in a box full of poison
and death an aesthetic to embody,
or mimic if you haven’t the talent.

I have teeth with which to make things bleed.

What is a leviathan to the land?
What is a man to the ocean?
Out of their element,

she told me, her head tossed back,
her mouth fixed on me, whites milky.
You must bite if you want to eat.
God made you to tear meat from bone.

My stomach was howling its sermon.
My shoulders lurched, pushing me forward.
My lips parted a fraction, colliding with coldness,

their heat cracking a fissure along the beast’s prison,
the careful construction collapsing to fragments,
a formaldehyde pool pouring from the wound,
and the shark came crashing to the bottom.

It was dead and rotten.
AMY KINSMAN is a poet and playwright living in Sheffield, England. In her spare time, she is an editorial assistant at Three Drops from a Cauldron. Her work has previously appeared, or is forthcoming, in After The Pause, Glass Octopus, Pankhearst, Picaroon Poetry and Rust + Moth. Find her online at https://akinsman.tumblr.com