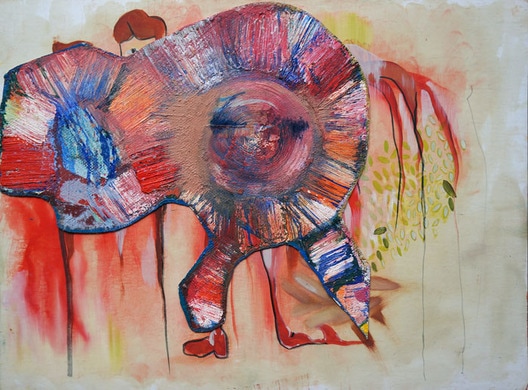 "Fission" by Leonard Kogan
Guernica, as painted in Afghanistan

for the doctors who were without borders

Between good and evil, a porous veil firmly stood hanging, as a curtain that was a wall

Touch
in love, its blushing skin
in brutality, its silenced felt, its pelt peeled from its peal >

For having put their deepest fillings onto their art, the civilians
became as much of a carcass
as any canvas is
< What poor artists the poured artists are >

As for those who survived, the mind is a Louvre of haunting images which is high on synesthetics
ANDRÉ BRAGA CABRAL is a Brazilian poet from Minas Gerais who currently pursues a degree in Journalism. His works have appeared in DIAGRAM, Mobius: A journal of social change, decomP, Word Riot, Radioactive Moat and a few other places.
E-mail: n.drewnjam@gmail.com  Twitter: @HashBrownIV
LEONARD KOGAN is an artist who lives and works in Baltimore, MD. Exhibitions of Leonard’s works include “Wall flowers” in Herzliya Museum, “The After Light” at the Andy Warhol Factory in New York, “SUR/FACE/S” at the Nexus Project Gallery in New York, a show at the museum of Yanko-Dada in Israel, “Project Diversity” at the Sputnik Gallery in Brooklyn and others. Leonard’s art has been featured in a number of literary and art magazines, often contributing to the covers. A publication in the Little Patuxent Review issue of “Doubt” features Leonard’s recent works and an interview with the artist.