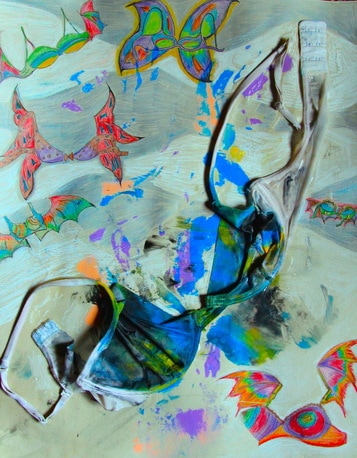 
Your blood turned to ink
smudging the tips of our manicures,

the details of your death paraded
our living room, erased the daily soap operas.

My mother says: She was nearly decapitated.
A death like that can only come from a man who loves you.

in a tangle of vines.  The lawyers
and the litany of a battered life,

the letters, the stalking, the rapes,
the beatings, the threats.

A crime of passion, they say.
A violence that’s domestic, they say.

Domestic, like the dog that nudged
your bones, licked the puddles of blood,

and barked for help. Years later,
my therapist says: He breaks in through

like that before?  Have you heard
of Nicole Brown Simpson?

For months we’re combing through
your crime scene, the caterpillar

crawl of justice.  Every woman
watching has no need for proof,

the threat of a man is in our DNA.
My boyfriend says:

With domestic violence, you always
have to question how it was provoked.

My student says: Oh no, he’d never
go that far with me.  We have a baby.

Before the verdict, your framed
face flashes across the screen again,

I see it and remember the way
a girl’s tongue razes a snowflake,

the way her heart grows roots
after her first kiss, the way

a woman’s smile
can be a muzzle.
ANNE CHAMPION is the author of Reluctant Mistress (Gold Wake Press, 2013) and The Dark Length Home (Noctuary Press, forthcoming). Her work appears in Verse Daily, Prairie Schooner, Ploughshares, The Pinch, New South, Redivider, PANK Magazine, and elsewhere.  She was a 2009 Academy of American Poets Prize recipient, a 2016 Best of the Net winner, and a Barbara Deming Memorial Grant recipient. She currently teaches writing and literature in Boston, MA.  http://anne-champion.com
SALLY DESKINS is an artist and writer focusing on the perspectives of women in art. Her art has been exhibited nationally and published internationally. She illustrated Intimates and Fools (2014, Les Femmes Folles Books, Nebraska Book Award Winner) and Leaves of Absence (2016, Red Dashboard). She is founding editor and curator of Les Femmes Folles, an organization dedicated to women in art.