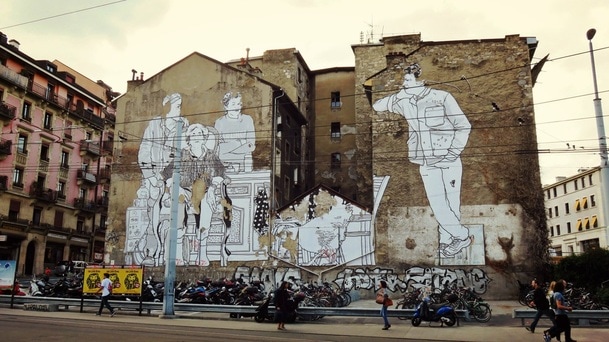 They walk out of the church their skies
grey faces. Why do strangers insist
on wrapping arms around arms around
each other on a morning, daring
bare air to mutter that this is not
a fitting thing. Sweat like cheap
jewelry grows bored, slides
elsewhere is lost in the cracks. Disappears
as if gone for a cigarette in the fog.
So has something else. They’ve already forgotten
the color of the door behind them. No
one bothers to look. Instead they inspect
skin from a distance, disinterest
and specimen folding itself in.
This is the sky. This is the inside
of your skin. This is what the other
was diving into himself stretching to find
out. Virtually an invagination. But the breath
of the seconds grew too bold, a distraction
slipping morning’s sin. This is the other
side now, and you know why
they make buildings -- to go out of.
ANNE DELATTE lives and works with language in New Orleans, Louisiana, where she is a member of the New Orleans Poetry Brothel. Her poems have appeared in DREGINALD, New Delta Review, smoking glue gun, Belle Journal, and the 2014 Best of the Net Anthology from Sundress Publications.
OLIVIER SCHOPFER lives in Geneva, Switzerland. He likes to capture the moment in haiku and photography. His work has appeared in The Red Moon Anthology of English-Language Haiku 2014 as well as in numerous online and print journals. He also writes articles in French about etymology and everyday expressions: http://olivierschopferracontelesmots.blog.24heures.ch/