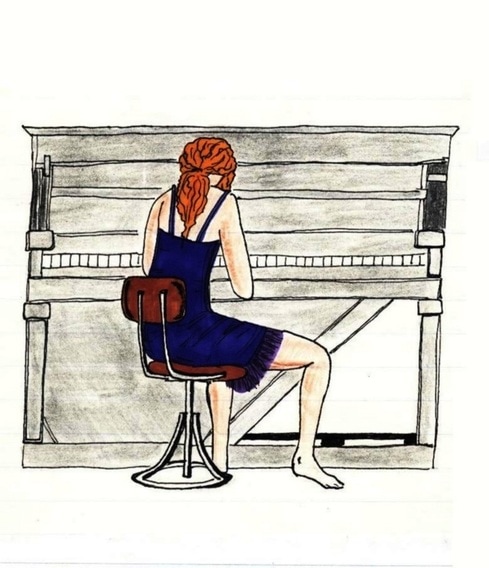 Because I needed a new god,
because I lost the strength to sleep
without fingernails slicing my arms,
because incense and chants no longer
laid me down, bare and bruiseless,
because the eagle showed itself to be
a bird of prey, its wings without down,
I raised my lips beneath a pillow
and sang a song with no score
in praise of a gun.

Barbados (n): island in the Lesser Antilles, northeast of Trinidad and Tobago; island sometimes referred to as Little England; subject of The History of Barbados by Ronald Tree (1977), kept overdue from the library for three months as I studied its four color maps, the waves rushing in grooves along the dirty paper; island with wild hogs to fill Dutch appetites; island which is both Atlantic and Caribbean; island where I went when I couldn't sleep without seeing the man with his hands down his pants running toward me; island whose motto is “Pride and Industry”; island named after its bearded natives so I tried to grow a beard; island originally named Ichirouganaim, originally named “red land with white teeth"; are the natives redheads, I wondered, reading by moonlight, but I never found an answer; island made of coral; island I haven't seen; island that grows an inch every thousand years; island that is alive.

Tell my brother what he gave me
when I heard the speakered piano
behind his bedroom door. Tell him,
what he didn't know, he didn't need;
I kept my secrets for me. I remembered
how to sing while in the shower when
no one was home and it was a start.
Tell him it wasn't his fault. When I
was running, I wasn’t running from him.
Tell him he showed me a girl who sang
like my heartbeat and it meant I still
owned a heart. I was running and maybe
god might find me. I found myself
in an ocean and though he only had
a handful of songs, tell him it was enough.

Praise to the redhead
straddling a piano bench.
Praise to the keys
she strikes, to the strings
and soundboard, dancing,
to the silencing science
of the damper. Praise
to the air carrying sound
as her feet hit the pedals,
to the ears that bargained entry
for the mezzo-soprano voice.
Praise to the fairy princess
bootlegged in my tape deck
as I mowed the lawn.
Praise to her many names.
Praise to the cordage she used
as a belt, tied to the side, praise
to her alone on a stage. Praise to
an alternative to Alternative,
an alternative to flannel,
an alternative to angry men
jumping off harsh and hard stages.
Praise to her for teaching me
about menstruation before
I learned male shame. Praise
to her reasons, to her rage,
praise to her upper lip turned up
like a shovel. Praise to her.
Praise to her rain and her moon,
to her way of saying fuck so
my mother couldn't hear. Praise
to the redhead, dancing, baying
her hair, collapsing her hands,
praise to her crying our names,
calling us, drawing us near.
Praise to her holding our slumped
and soldered bodies, watching as
our scars bled us nearly dry,
and still singing, still carrying us.
Praise to her still holding the gun
so we don't have to.
ANTHONY FRAME'S first book, A Generation of Insomniacs, is an ode to  90s grunge music. He is also the author of three chapbooks, the editor of Glass Poetry Press and the poetry editor for The Indianola Review. He has been awarded two Individual Excellence Grants from the Ohio Arts Council.
NICOLAS PERUZZO--Montevideo, Uruguay, 1980. He does scrip-writing, drawing, and is the editor of the comic imprint Ninfa Comics and co-founder of the educational comics project Bandas Educativas. He wrote and illustrated the graphic novels Froggies: Catharsis and Rock n Roll, Moving Out On, Tales of Fructuoxia City. He currently draws the bi-weekley strip Brad’s Pit.