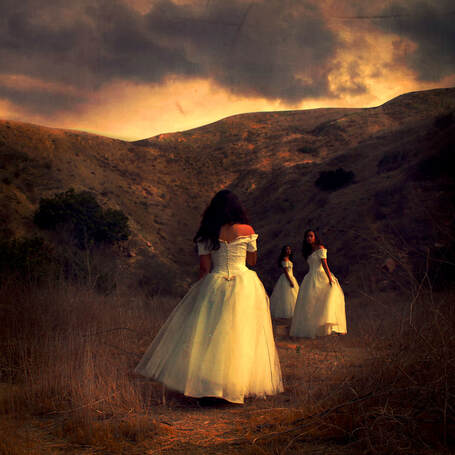 Longing for Soft Days in the Desert by Ariel Machell

I miss the cactus as only a cactus
can be missed, the dry warmth of your company
that tastes of Joshua Tree, the never-ending
laughs and stomach aches and prickly fingers
from loving the cactus too hard.
You mustn’t touch, but we touched.
And the coyotes watched us from their dens
and the tarantulas continued their lusty march
as we marched. We marched, picking our yellow
flowers, counting the seconds in hours.
When the sun went down, the moon rose
in its place, bigger than the pupils swimming
in our eyes. And we danced on a picnic bench
under its orange light. Our cackles rose as it rose,
and we stood in each other’s embrace, our chests
bee-hiving against each other, our mouths' own moons
peeking over the terrains of our lips, grinning
and full, as it passed over our heads
and took its place in the hanging night.
The Winnebago’s engine had gone still,
shuttering its lids to what we carried
on our backs. The woman inside did not know
how we talked of her, will talk of her long after
we’ve forgotten her face and the color
of the bandana she wore, only the motion
of her fingers as she guided us backwards,
not knowing it was us that she guided.
Days later, after we piled into the car
that had no business out there in the persistent
wind and horizon, after we dug its feet
out of the loose dirt, our combined weight
driving it in again, after we hooted and leapt,
sprinting alongside it in the dust trails,
after we slowed into the LA air, sobering
in the haze and the crowded streets,
after we slugged onto Hollywood, hazards
blinking in the reflection of the silver fire hydrant
and the cracked leather of the curbside couch,
after we unpacked that strange earth,
shaking the stray sprinkles from our hair—
After, days later, I dreamt that we’d plucked
the moon from the night’s roost and nestled it
in the empty egg carton we all carry.
How lonesome it felt this morning, standing
early in fridge light, to find neither egg nor moon,
only tiled floor against my toes.

Ariel Machell is a California poet. She earned her BA from the University of Southern California where she received the Gene and Etta Silverman award in poetry. She will be working toward her MFA at the University of Oregon in Fall 2019. Her work has been published in Gravel, adjacent pineapple, and Landlocked.
​Fiona Hsu was born in February of 2001 in Orange County, California. She has won first place in Yorba Linda Women’s Club art competition in 2019 with recognition from Congress, Senate, and Assembly, and she is a National Silver Medalist of Scholastic Art and Writing Awards 2019. Fiona is currently studying at UCLA as an undergraduate studio art major. Her works capture the aspects of beauty within woeful and melancholic definitions that narrate quaint and odd stories, in which she hopes her art serves as rusty mirrors for her audience—reflecting and reminding them of a quality and/or memory from the past.