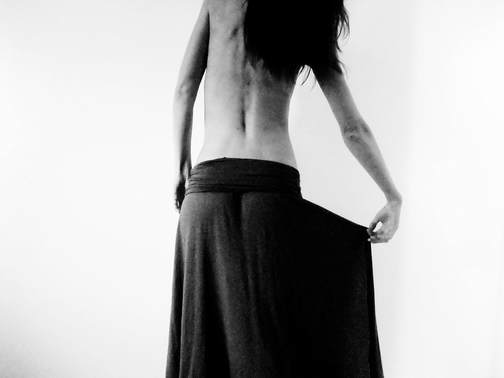 "Licking Honey Off a Knife" by Tricia Louvar

"Moments Before Finding the Spare Key" by Aya Elizabeth

In the crosshairs of an escape I am undeniable and turned away,
last girl scout in the stairwell, cacti-tongued and fickle-heart

and I’m out like the string of lightbulbs that just
can’t get fixed. I’m on the ladder, waiting

for someone to lace their fingers around my ankle,
hold me steady as I twist and twist and wait for the switch

to click on too early and leave me blind and stranded
and tangled, and what a mess it is to be at the mercy

of another’s ache for light when you were the one
who wanted it first.

Rosemary, blackberry, brush fire across the river,
and I’ve been giving prayers teeth all night long.

The key breaks in the lock and suddenly I’m late
For the party happening in my own home.

Anything could happen: the oven could catch on fire,
the crows could make a nest in my kitchen sink.

The drain would clog up with string and twigs
and honeysuckle pulled from drainage ditches.

I act like I’m looking to live in solidarity with the stray cat,
but really I’m just wishing now that I had become a doctor

so I could cut all the bad parts out, re-sew myself into a net to let
the uncertainty all wash through. But right now

I’ll live with the spare key undoing the latch of the life I built,
with a kitchen that lives in waves of thunder and marching beasts,

that I chose it on my own and will make it mine and right
by myself.
Aya Elizabeth is an artist, bookseller, and poet living in the San Francisco Bay Area. Her work has appeared in Konch Magazine, Typishly, and The Write Launch.
​Tricia Louvar lives in the Pacific Northwest and studied journalism, poetry, aesthetics, and documentary photography in college and beyond. She works in publishing as a visual artist and writer. Her work has appeared in the New York Times, Los Angeles Times, Brevity, Orion Online, Zyzzyva, and more.  tricialouvar.com