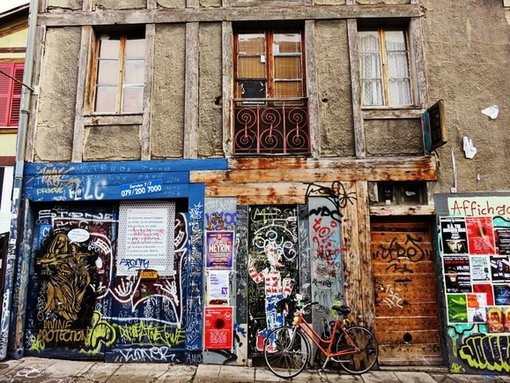 I did not want to come to this table,
which is not like Monk’s Café in Seinfield,

and see such sadness that was our booth.
here is where I tasted my first Reuben-sandwich

Dad told me, You eat too much,
which was before mom said,

I always preferred charoset
over the maror and chazeret,

I wanted this to be funny at the end,
but my spiritual-teacher was a pimp

when you’re called to the table, eat.
when you don’t like what you’re given,

my dog has a wild-heart
as I’m sure yours does.

we tromp through snow,
snow boats are my feet.

I feed my dog.
I will not cook her

into a savory stew
with green onions.

I would not name her
Boshintang.

I am patient while she bites
at my ankles,

I run with her through the snow
playing

catch-me-if-you-can,
tugging on the leash,

& coming back
when I hear my name, No.
BO SCHWABACHER's poetry has appeared or is forthcoming in CutBank, diode, Muzzle, Redivider, Tinderbox Poetry Journal, WomenArts Quarterly Journal, Word Riot, and elsewhere. She teaches at Northern Arizona University.
OLIVIER SCHOPFER lives in Geneva, Switzerland. He likes to capture the moment in haiku and photography. His work has appeared in The Red Moon Anthology of English-Language Haiku 2014 as well as in numerous online and print journals. He also writes articles in French about etymology and everyday expressions: http://olivierschopferracontelesmots.blog.24heures.ch/