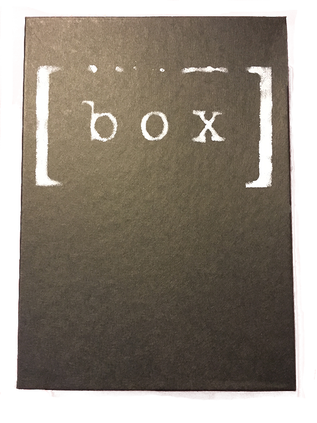 In her essay, “On Erasure,” Mary Ruefle writes, “An erasure is the creation of a new text by disappearing the old text that surrounds it . . . . a government official deleting highly sensitive material on a document . . . .” Ruefle’s quote describes both the physical and historical experience of Kevin McLellan’s [box]: the poem depends on removing text from the voice of a man who witnessed and survived the AIDS pandemic of the 80’s, a time when people’s suffering and dying was ignored by the government.
[box] is an interactive erasure poem. Unlike an erasure on the page, this “poem” comes in a small, 5” x 7” x 1” black matte box, with the title enclosed in brackets, written in chalky, white font--as if the name itself could be erased. The box holds seven transparencies, lying on cotton padding. The cotton makes lifting these slippery pages easier, but it also reminded me of a box holding a jewel, or something precious. So, the box, the enclosure, is as much as part of the poem as the words. The inside lid of the box provides us the voice of the speaker. How is he to assess his existence: the guilt and the grief he and society carry to this day? [box] replicates, as an erasure, the “erasing,” the disappearing, of the people who were stricken by HIV/AIDS. Ignored by the government and by science, they seemed not to be there at all. The speaker asks, “what psychological and socio-sexual impacts did this essentially untreatable disease have for [not only] homosexual men of this generation, on their collective unconscious?”
The words on these transparent sheets are “erased” as you slide each sheet off the pile. At the same time, those same words, the ones that remain, are illuminated when you hold a sheet up to the light, alone. When you first open the box, all the sheets lie on top of each other:

But, once this first sheet is lifted off the others, and read alone, we are left with:

where did it go
where did that leave me

By having to touch [box] to experience it, we, too, must engage with such pain--as fearful as it was for people to touch a victim stricken by the virus only 30 years ago.
[box] is an experience, emotional, historical, and tactile. I remembered the wasting away of some of my own friends: how so many were reduced to shadows at that time. Ruefle describes writing erasures as “bandaging words, and the ones left were those that seeped out.” Kevin McLellan’s [box] is like the black box that survives a plane crash: the information is locked deep inside, amid the debris and ash,

The grief is transmitted by peeling off the layers of the speaker’s experience: the shame of the wealthiest nation in the world for ignoring such suffering because of collective, willful, ignorance; and the need to handle--in a very real way--these emotions. [box] is a relevant artifact, vital to our psyche, with a message we must still heed.

[box] by Kevin McLellan from Small Portions on Vimeo.

Kevin McLellan was born in Conway, New Hampshire, where he was mostly protected by the White Mountains—that is, until college. He attended New England College—one semester in Henniker, NH, and subsequent ones in Arundel, West Sussex. Here, and throughout parts of Europe, he began the process of learning how to be the adult he needed to become. After a few semesters and 1000s in debt, he dropped out and returned to his hometown for a spell. A spontaneous cross-country drive would follow and Kevin fell in love with love for a San Francisco minute and he discovered poetry, or perhaps it him, and then he got dumped. This prompted another brief residence in his hometown before settling in Portland, Maine. Here he would meet his best friend and resume studies at the University of Southern Maine until the year abroad at the University of Central Lancashire where he fell in love. The return to Maine alone was difficult, yet poetry would continue at Vermont College. Soon after [completion], Kevin recognized a grave need to redefine his relationship with poetry and consequently himself in Jamaica Plain, Massachusetts. This prompted relocation across the Charles River to Cambridge where [t]his creative work--Tributary, Round Trip, [box], the forthcoming Shoes on a wire, other unpublished projects, and works in progress—has been ongoing, yet Kevin has realized that there’s other important work, and he must become this person too.