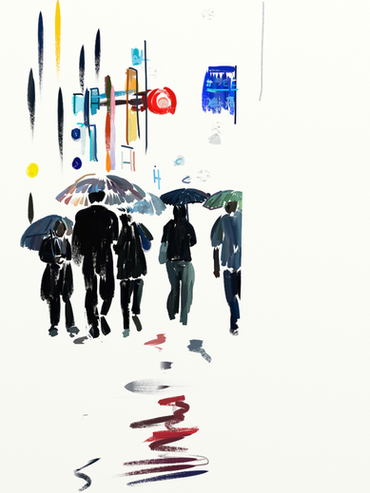 Tori Amos knew that foolishness tended
to edge on something inferior:
“not the Red Baron, not Charlie Brown.”
She feared the way a boy’s boots
could leave a mess
and how one could spend a lifetime in them
learning how to commit ever so softly
and with total confidence.
She could balance on the lip of an eggshell.
She could convince the rain she was falling.
If only it were clear when to come in stomping,
when to come in trampling
that Martian-red, rust-belt,
ferrous-on-the-fillings dirt
the color of her hair,
which might be the only thing standing
after silence,
exile,
and the cunning of character.

There should be a word
(in German, maybe)
for the way you buckle--
a word with shoulders
as broad and ill-fitting as Chicago’s,
a compound, polyglot word
that means I am missing a past
that is still in the present
from a future that has yet to happen.
This word would start with “X” or “Z”
and be both a noun and a verb.
It would be a contronym
and make the OED in record time.
Or maybe it would be a secret word
we pass along the string
of our clubhouse coffee-can telephone.
Or it might simply be a sad,
slide guitar kind of word
pretending to be fun but cleaving to
the shapeless, unquenchable, and crashing
yearning you had at 19
when you wanted something
(so bad)
but didn’t know what,
like Liv Tyler in Italy
worrying Hope Sandoval’s bottom lip:
menacing,
inviting,
and aware you are watching.

#buckle
CARLO MATOS has published 7 books, most recently The Secret Correspondence of Loon & Fiasco (Mayapple Press) and It's Best Not to Interrupt Her Experiments (Negative Capability Press). His poems, stories, and essays have appeared in such journals as Iowa Review, Boston Review, Rhino, and Handsome, among many others. Carlo has received grants from the Illinois Arts Council, the Fundação Luso-Americana, and the Sundress Academy for the Arts. He currently lives in Chicago, IL and is a professor at the City Colleges of Chicago.
TOM HARDING lives in Northampton UK where, when not working, he writes poetry and draws. Tom has been published in various places including Parameter Magazine, Identity Theory, Unlikely Stories and Nthposition. He also maintains a website of his own work at tomarianne.net.