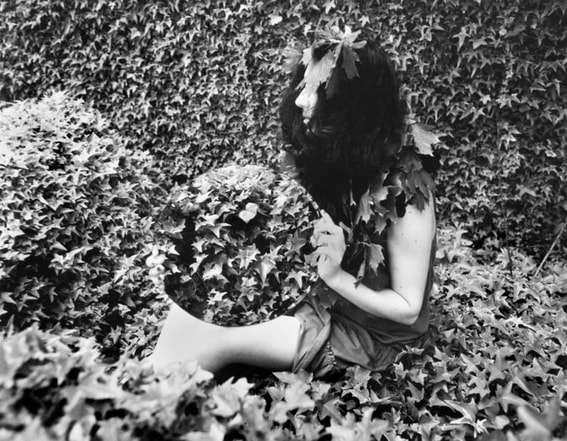 Bigfoot Gets Nostalgic
I was a child once. At my eyes,
the cracked earth, my mother’s
knees. I remember hiding
behind them as she hid

from our seekers behind evergreens.
It wasn’t a game. We sought sweet
berries in the piney heat, stalked elk,
caught a magpie once on the wing.

I remember languages I no longer
recognize—the drawl of sap,
reedy light playing so high you had
to be kid or canine to hear it.

It’s lost to me now, like so many things.
My mother. The others. I remember
the seekers’ kin, those creatures who stood
like us but not as tall. Smooth and small,

like I never was. I remember the smell
of their desire—white flowers: narcotic,
indolic. Their fear like a body gone off.
They dropped ducks from a distance, broke

open the mountain to make way for swifter
movement, so harried, never knowing
what waited at the top. What watched.
Their eyes always fastened straight ahead.

What use is that? When I was younger,
less content in my seclusion, I believed--
hoped—they might be upright babies
with some strange disease, for like babies

they seemed only to want and wail, but I
was a baby once— I was still quite perceptive.
Now, I think they might be something
altogether other. Phantoms, maybe,

for how they linger but can’t fathom.
Or demons. Maybe monsters. Something
that troubles children but only as they fall,
like pierced birds, to sleep.
Demonology


We are legion. Are we not divine? Gods
of godlessness, would you not call

on us in darker times? Seek us not
in ivied castles and breathing

ruins, where good green life
triumphs over what you have built.

Do not squint against the forest’s
wide and simple daylight

to hallucinate our forms.
Truth be told, we prefer

the suburbs, the houses lined up
like teeth around the cul-de-sac’s

ever-open mouth. A place not quite here,
not quite there, like a slumber party

where children believe their fragile
fingers crackle with a force

that can lift one another from their sleeping
bags, light as plucked feathers, stiff

what listens when you ask into your pillows,
What good is it to be good?

Ask again. Ask three times. Speak us
into being and we’ll answer.
Caylin Capra-Thomas's second chapbook, Inside My Electric City, is available from YesYes books. She has been awarded fellowships and residencies from the Vermont Studio Center and the Studios of Key West, and her poems have appeared or will soon in journals including New England Review, Crazyhorse, Colorado Review, Copper Nickel, Pleiades, and elsewhere. She lives in Idyllwild, California, where she is Poet-in-Residence at Idyllwild Arts Academy.
​​Julia Forrest is a Brooklyn based artist. She works strictly in film and prints in a darkroom she built within her apartment. Her own art has always been her top priority in life and in this digital world, she will continue to work with old processing. Anything can simply be done in photoshop, she prefers to take the camera, a tool of showing reality, and experiment with what she can do in front of the lens. Julia is currently working as a teaching artist at the Brooklyn Museum, Medgar Evers College, USDAN Art Center and Lehigh University. As an instructor, she thinks it is important to understand that a person can constantly stretch and push the boundaries of their ideas with whatever medium of art they choose. Her goal is for her audience to not only enjoy learning about photography, but to see the world in an entirely new way and continue to develop a future interest in the arts.  You can find her at her WEBSITE and on instagram: @Juliajuliaajuliaa