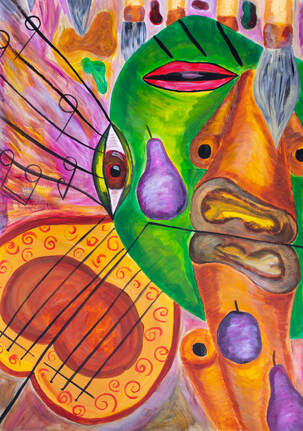 Mercy runs on what it knows.

This poem won't be about men in shorts, carrying

their little animals around and smoking on a porch.

It feels so lovely you are watching me watch you.

You don't have to look far to see something bright as a smile,

I am just by your side.

My brother told me you know what love is.

If you really know what love is,

then you understand what it means to ring a bell and don't hear it.

Or let's put it this way, one day I want my people to

We keep running into things. Things that shape us,

and can even harm us. As a young boy, I was told

that I can be anything I want. I have carried this notion

with great expectations, and have been opening many doors;

and the wrong ones too. Some people think I am mad when I

anyway I get the future to talk to me. Because I want to know about things.

I want to know about effect before its cause: I believe

in that way we can catch falling oranges before

they hit the ground and open their ratchets to the world.

In my place of birth, I shouldn't pray to God for good roads,

for good hospitals and schools, for good food and drugs,

for electricity, for better take-home pay, for competence

or for goodnight sleep or for safety and my entitlements.

and Carnations and Helichrysum and Gladioli

by my village roads, dancing under the passing breeze,

and wonder what they think of me and the

worries welled up inside my head.

It's easy to say and hardest to see.

Mercy runs on what it knows:

​I hold your hands and inhale.
He (@ChinuaEzenwa) is from Owerri-Nkworji in Nkwerre, Imo state, Nigeria and grew up between Germany and Nigeria. He has a chapbook, The Teenager Who Became My Mother, via Sevhage Publishers. He became a runner-up in Etisalat Prize for Literature, Flash fiction, 2014. He won the Castello di Duino Poesia Prize for an unpublished poem, 2018 which took him to Italy. He was the recipient of New Hampshire Institute of Art’s 2018 Writing Award, and also the recipient of New Hampshire Institute of Art’s 2018 scholarship to MFA Program. In 2019, he was the winner of Sevhage/Angus Poetry Prize and second runner-up in 5th Singapore Poetry Contest. He won the First Prize in the Creators of Justice Literary Award, Poetry category, organized by International Human rights Art Festival, New York, USA, 2020. His works have appeared in Lunaris Review, AFREADA, Poet Lore, Rush Magazine, Frontier, Palette, Malahat review, Southword Magazine, Vallum, Mud Season Review, Salamander, Strange Horizons, One, Ake Review, Crannòg magazine, The Spectacle Magazine, and elsewhere.
RowanArtC feels that the work should speak for itself and invites the viewers to go wild with their imagination. The world within us (random thoughts and emotions) is a rich spring of inspiration for her work.
​