TWO MILES DEEP IN LA LA LAND (2012) is a 16mm film transfer to video.
The quote used in the film is by Alice Walker.
Click the "full screen" icon for a better film experience. 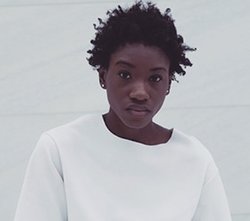 Christie Neptune is a New York-based artist from Brooklyn, NY. Working across photography, film, and new-media, Neptune investigates how constructs of race, gender, and class limit the personal experiences of historically marginalized and stigmatized individuals. Critically aware of both self and subjectivity, Neptune illuminates the personal and emotional aftermath of a society that disregards and delegitimatizes those that endure the brunt of historically upheld supremacies.

Neptune is a graduate of Fordham University and has been featured in publications including Les Femmes Folles, HYSTERIA: What Was Taken, and Psychology Today. Recent shows include a solo-exhibition at Five Myles Gallery, Brooklyn, NY (2015) and an upcoming exhibition at Yeelen Gallery, Miami, FL (2015). She has been included in group exhibitions at UnionDocs, Brooklyn, NY (2015); the Momentum Technology Film Fest at Rutgers University, New Brunswick, NJ (2014); and 440 Gallery, Brooklyn, NY (2013). Neptune is also a 2015 Hamiltonian Fellow and Engaging Artist in Residence at More Art. http://christieneptune.com