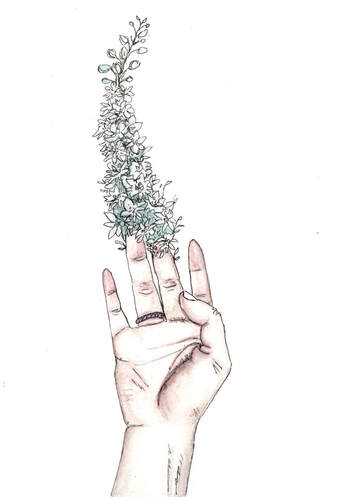 Ode to a rockery by Christopher Lanyon

We’re gardening again so I’m cracking tins, rolling cigs—
it feels important to meter out the gentleness, put something harsh
on the tongue each time I’m kind to the soil.

An exhaustive list of the things that survived the winter:
one fern, two rhubarbs, an unknown bulb, a lonely strawberry
and the orange poppies that I’m trying to make our flower.

We must imagine Us happy, as we redo the rockery each spring,
after the stone of winter has ground the plants to a fine earthy dust.
The joy of taking pride in something we can never own, but make ours, just briefly.

Christopher Lanyon is a mathematician and poet based in Nottingham, UK. His poems have been published in Ambit, SPOONFEED, Brittle Star, Finished Creatures, Abridged and Under the Radar, among others. His debut pamphlet, swell, comes out with Bad Betty Press in 2022.
Larissa Monique Hauck is a queer visual artist who graduated from the Alberta University of the Arts in 2014, where she received a BFA with Distinction. Her artwork has been featured in multiple regional and national group exhibitions as well as a growing number of international exhibitions. She has been selected for inclusion in events such as Nextfest 2018 (Edmonton, AB), Nuit Rose 2016 (Toronto, ON), and the 9th Annual New York City Poetry Festival 2019 (New York, US). Her drawings and paintings have also been featured in publications such as Creative Quarterly (US), Wotisart Magazine (UK), Minerva Rising (US), and various others.