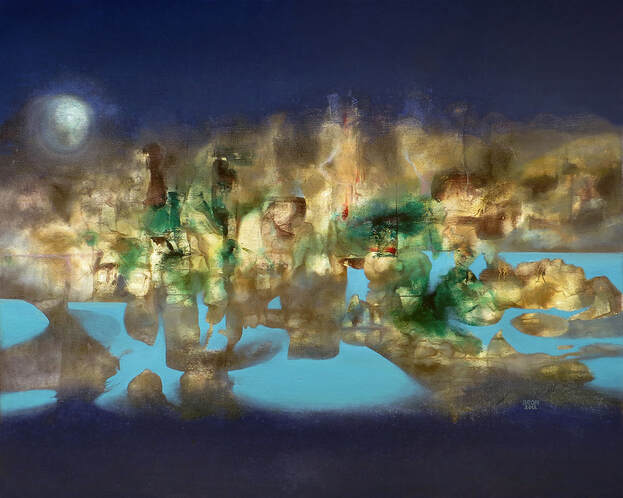 And then there was my best friend’s body:
broader, and hairy in a way
I had not noticed before.
And me in bed waiting for him
to strip down to his boxers.
Both of us fresh out of the shower,
drunk still. I took him in my arms
and joked a kiss onto his shoulder.
He shrank inwards like a sea-anemone
prodded by the guileless finger
of a tourist. He told me that Maddie
was the only person to ever spoon him
and he could not bear it.
I rolled away and thought
about the glow-in-the-dark stars
my parents had constellated
on my bedroom ceiling,
how much barer this ceiling was
without them. Luke lay on his side,
a body of jutting Cornish rock,
forming a bay in the sheets between us.
And the sea was spread out
like it had been earlier that night,
as we stripped down to our boxers
and ran towards the waves, pressing
our thighs into the oncoming water,
cleaving through to find it constellated
with bioluminescent water-bugs.
The nighttime sea was dense
with them, but each time we tried
to catch one it flickered out in our palms.
The ocean rippled out from us
in a dark slab, like the surface of the bed
we shared. We were a quiet coastline,
cupping something unspoken between us,
unwilling to let it go.
Bathers
I can hear you from my room, with two doors and a corridor between us. Muffled, as if it
were me sinking into the scald of bathwater, with my knees out and cold, and my ears
sloshing with the breaking waves of your laugh and then theirs. I know how you look
undressed: the way purple scars woodlouse themselves across the upturned stones of your
shoulder blades. The skin on your chest is as pale as soap suds. When I hear you both singing
in the steamy bathroom, naked, pressed against each other, cupped in each other’s hands, the
scene is all pinks. Dewy lips and tear ducts and cuticles and blisters raised by the heat of the
bathwater. When it goes quiet, I know that you are kissing.
Christopher Lanyon is a poet, mathematician and PhD student based in Nottingham, UK. His poems have been published in Abridged, Strix, Finished Creatures, SPOONFEED and Bad Betty Press’s Alter Egos Anthology, among others.
Alexey Adonin is a Jerusalem based abstract-surrealist artist. His works have been showcased locally and internationally and are held in private collections around the world. Alexey uses a unique and beautiful technique in which he layers oil paints solely on top of one another to create a mystical, transparent look. His philosophy stems from the idea that one's reality is made up of what they believe it to be. Alexey uses his art as a platform to express his profound ideas about reality, humanity, and their intertwined behaviors. You can view more at www.alexeyadoninart.com.