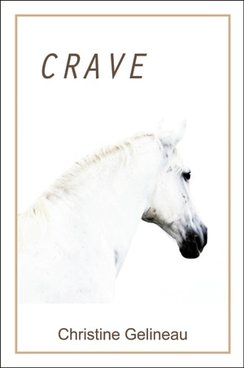 
In her prose poem, “Orbit,” Christine Gelineau writes: “This poem tilts its chair back at precarious angles . . . . it gallops from one genre to the next without ever resorting to the whip . . .  . This poem is really getting somewhere.” The poems in Gelineau’s latest collection of poetry, Crave, do indeed gallop as rhythmically as horses’ hooves. Using this majestic equine image, which evokes a muscular sensuality in its movements, the poet travels emotional landscapes. At times, Gelineau unearths horrors, at other times, deep love.

“For the most part people don’t/want to be told the truth.” Gelineau’s opening poem, “Hard Evidence,” challenges us with this statement. In this poem about about buying a horse one cannot control, the speaker warns us about where we might be riding in the book. Many of the poems in Crave are written in a narrative style, belying a disorienting, shocking reality. “Pap Smear,” which elicits “a vulnerable//feeling, lying on the narrow table/for examination, naked except/for the paper vest” tells the story of incest, murder, and rape. I was constantly amazed by Gelineau’s careful placement of delicate imagery (“paper vest”) juxtaposed with heavy, frightening imagery (metal, police procedures, invasion). In the facing poem, “What Men Do,” the poet addresses the “final kindness,” the euthanasia of horses during World War I, in beautiful language, again using delicate precision alongside a brutal enormity:

Race over, they swiped and curried
the sweated necks, sleek flanks,
disentangled forelocks,
fed their darlings tobacco and fruits

then each laid his own pistol
in the hollow, above his horse’s eye
and squeezed.

Gelineau’s poetic impulses structure the lines and the imagery so that the poems in Crave are propelled over physical and emotional landscapes. The movement of the horse’s hoof is sometimes a human movement. In “The Geometry of Grief,” which is set in a graveyard with the diggers measuring the size of the hole, the speaker walks over this grim lawn, during a funeral, musing:

Time enough and space
for grief to find them too
but today, the rain surrounding them

is April’s, silver and sweet.
The grass just greening at their feet
feather the ground like a promise.

The poetic movements are always steady, and accurate over this troubling terrain. The gait is faster in “Patterson, NJ,” a poem dedicated to Maria Mazziotti Gillan. Here, there is danger, so the footsteps are urgent:

black dress, and sensible
shoes; she is running now
in those shoes . . . .
she smells the risk in the footsteps
behind her and she concedes
nothing, makes no pretense
of ladylike behavior or dissembling
politeness, no, she sprints . . . .

Gelineau, while transforming the woman into a mare, keeps a steady 3 beats in each line, containing the fear--but just barely.

Gelineau’s love of poetry (and poets) is rivaled by her love of horses. In Crave, these magnificent creatures become representative of people cherished, of the self, and of time: all things demanding honor and respect. The amorphous beauty of horses can be seen in “The Mare That Loved You,” a poem about ending a horse’s life.

her bewildered
eye fixed
on you, who had broken
the silver caul as she swam
fish-fetus from the womb . . . .

This glowing horse-in-an-orb is seen again in “Love Song,” when the poet writes, “I strain/to hover:/fish/twisting silver.”  Repetition of images and of experiences is a truth that Gelineau comes back. While traveling through Wales, the speaker in “Time is a Horse” muses:

. . . . though time is a horse, a runaway
none of us can dismount and so
the need is to find a way to enjoy the wind
that snatches handfuls of your hair as you race
the horse’s mane, your mane, the rhythm
and energy of the haunches powering under you . . . .

It is no wonder, as I read deeper into Crave, that at times I felt an internal response to just this sensibility rhythms of the poems. I needed to read them out loud, feel them inside of me.

So, in Crave, I became a rider, but also, under the steady hand of a sure-poet, the creature that’s led. Gelineau gallops from each enormity in life--death, crime, parenting--as a true equestrian. Like the cover art--a white horse’s head on a white background--we’re struck by the small, darker images that define and complete this beautiful animal. In her closing poem, “Trick Rider,” Gelineau writes: “The daring Trick Rider has an abiding faith in three-four time . . . . Clinging to the belly of the world, Trick Rider feels the enormity of the heart beating against his own, he senses the menace and excitation of hooves . . . .” Crave is a muscular book, one that takes careful, masterful balance to maneuver; and a book that leaves the reader with a heart beating stronger. 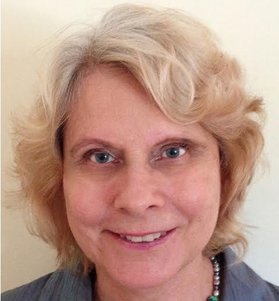 Christine Gelineau lives on a farm in upstate New York where she and her husband raise Morgan horses. Her poetry collections include CRAVE, from NYQ Books, as well as APPETITE FOR THE DIVINE and REMORSELESS LOYALTY, both from Ashland Poetry Press. With Jack B. Bedell she is editor of the anthology FRENCH CONNECTIONS: A GATHERING OF FRANCO-AMERICAN POETS. Gelineau is a recipient of the Pushcart Prize, the Richard Snyder Publication Prize, and Editor's Choice for the Robert McGovern Award. She teaches at Binghamton University, where she is Associate Director of the Creative Writing Program and coordinator of the Readers’ Series. She also teaches poetry and creative nonfiction in the low-residency graduate writing program at Wilkes University.