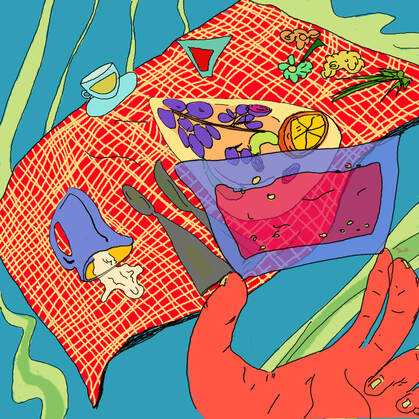 In the beginning, we created
something out of nothing.

God said, ​Let there
be light​—and then there was light,

or something oddly similar.
See, we conjured good tricks,

fickle little things. We said here
there are animals and here

there are plants and here:
there are bodies—but you were never

meant to see that. You were meant
to stay in the light, to never question

its source. Heed the narrative: ​Let there
be Heaven. ​God himself goes

before you. Bow, pray, or do something
oddly similar. The room is dark;

no one can see you sinning
quietly. ​It was good, ​God said,

though we didn’t know
if he was talking about genesis

or gambling, our little tricks lying on the line.
And it was so: the two great lights came

out, and there was no question of their source.
God blessed them both and all the waters

writhed with monsters, and the fowl ruled
the sky, and God created himself,

or something oddly similar. ​Let us
make mankind ​and hope they bless

themselves. God is resting, acting
holy, while we confess our questions.

In the beginning, we created something—
or was there never nothing? Just a story,

a source, a body as a frame—
or something oddly similar.

Dana Blatte is a sixteen-year-old from Massachusetts. Her work is published or forthcoming in Fractured Lit, Kissing Dynamite, Parentheses Journal, perhappened mag, and more.

Prachi Valechha is a freelance cartoonist and animator from India. Valechha loves to make Toons and Toons for Tunes.
You can find more of their work at: instagram.com/rainbowteeth