Admittedly, it was my infatuation with Natalie Easton’s poetry that led me to Up the Staircase Quarterly years ago. She writes with the sort of impact that doesn’t diminish; her poems may bend a bit to show the layering of ideas tucked within them, but they never lose their weight. To this day, I can’t read “Death” without examining the silences in my own life – it’s this sort of reaction that also makes me want to write, which is the greatest gift from writer to reader. - Rachel Nix.

Silence is a black ride in winter's white street,
the ideal movement of an expression
on a turned face. It gathers up its wingtips, preens and broods.

I am feeling pure in its contemplation.
It has settled in the rafters of churches, in hospitals
and above our bed;
it hears confessions
in the weary look, the way the heat of guilt
rises in grief's stage whisper.

Because I love you, I leave.
No figurehead
to look on in want or pain.
I would rather stalk the hours of a dog
on its guard
than trail in the wake of your restless anger.

This is the death of the time when you knew me. Next time
starts tomorrow, at our breakfast. Plates remain full
and then, the birds will not touch
what I made for you.
Death makes its clanging assertion
that from time to time these things need to be made plain:

The evidence weighs heavy on the virgin's dress. The headlights
force her to bow her head in shame or prayer
and a quilt is folded closed. 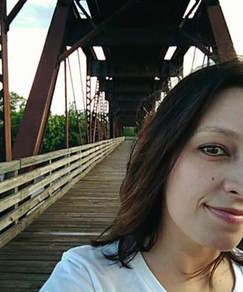 
Rachel Nix is an editor at cahoodaloodaling, Hobo Camp Review and Screen Door Review. She also edited the international anthology America Is Not the World. Her own work has appeared in L'Éphémère Review, Rogue Agent, and Words Dance. She resides in Northwest Alabama, where pine trees outnumber people rather nicely, and can be followed at @rachelnix_poet on Twitter.