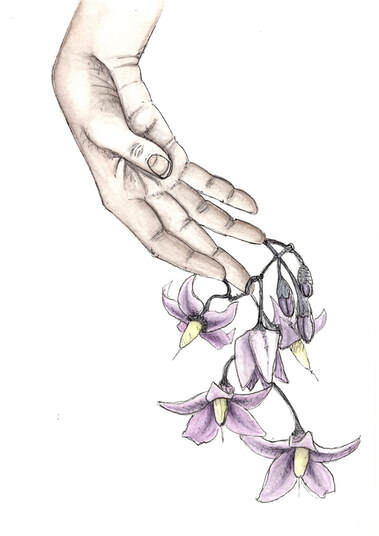 Ode to the Contents of a Drawer in Pittsburgh

The orthodontic model
of my teeth, for instance—

I remove it from its box
gently as a doll brain

might be lifted from its skull.
Whose finger wore this fake ruby ring?

Who carried beaded evening bags
and kept them half a century

before they landed here?
From shaken-out squares of velvet

the size of postage stamps,
infant curls in envelopes.

And here’s the rabbit’s foot,
the parquet darning egg,

bivalve shells with gardens
of Japan painted inside.

A ponytail wrapped in plastic
looks like a little chestnut mink.

when it was scissored off—
or the person I stopped

becoming, all the people
I meant to keep

inside, those by accident,
by chance,

and those I would not have
imagined living

as long as they have in me,
no one else knowing.

Ode to Kittens
May I speak seriously of kittens
just now drowsily climbing
from bed, the first time

without mother hissing
the human witness back
to the other room?

Or does that open the door
to indulgence? Tiny bodies
with outsize paws

crookedly stepping
and grasping
at yarn, not to mention

the laser
zagging its red line
across the wood floor

where lately there were tears
overhead, overheard,
perhaps, by the cat,

heaped underneath
with creatures who care not at all
for sadness, how it emerges

​gluey as newborns then shambles
beyond the soft confines
in which it was fed.

Deirdre O'Connor is the author of two books of poems, most recently The Cupped Field, which received the Able Muse Book Award in 2018. She directs the Writing Center at Bucknell University, where she also serves as Associate Director of the Bucknell Seminar for Undergraduate Poets.
Larissa Monique Hauck is a queer visual artist who graduated from the Alberta University of the Arts in 2014, where she received a BFA with Distinction. Her artwork has been featured in multiple regional and national group exhibitions as well as a growing number of international exhibitions. She has been selected for inclusion in events such as Nextfest 2018 (Edmonton, AB), Nuit Rose 2016 (Toronto, ON), and the 9th Annual New York City Poetry Festival 2019 (New York, US). Her drawings and paintings have also been featured in publications such as Creative Quarterly (US), Wotisart Magazine (UK), Minerva Rising (US), and various others.