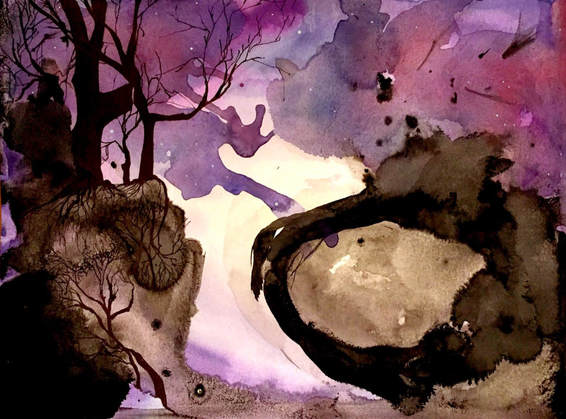 Let’s say her name is Amelia & she drags
her children behind her in a sac, but let’s
also say that this an act of maternal mercy
& when they are ready for the world,
Amelia will christen them: Jorge. Kim.
Nefertiti. Hans. Abram. Jacques. Rita.
Lars. & so on. As they stagger up her limbs
& nestle into the safety of her back, she is
right to be smug—her babies would never
commit matriphagy. Let’s say they link
their small arms together, that their mother
is such a good mother because she brings
them to a stream, teaches them to drink.
Let’s say again: Amelia was made for
this mothering & her offspring will spell
her name out in pebbles they collected
in their burrows, appearing in the moonlight
to sing her praises & let’s say how satisfying
it would be to come into the world like this.
Elly Finzer is a poet from Portland, Oregon and now lives with her family in Arizona with hopes of moving back to a greener place someday. She has a BA in Poetry and has published pieces with killpoet press, Citizens for Decent Literature, heroin love songs, In Between Altered States, and Sweatpants & Coffee. In 2016, Elly's first book, Says the Speck, was released by Kleft Jaw Press, she was a featured poet in Flagstaff artist Elizabeth Hellstern's Telepoem Booth, and she was featured on The Phoenix New Times 100 Creatives list. Recently, Elly has also been a featured speaker and performer for Arizona Masters of Poetry at the Thunderbird Arts Center and featured poet for the long-running Caffeine Corridor Poetry series in Phoenix. She's currently holed up in an apartment somewhere in Scottsdale, working on her next manuscript and hoping it won't take another 15 years to publish that one.
Charlotte G. Phillips is a native artist and poet of Richmond, Virginia where she received her BFA from Virginia Commonwealth University. She currently resides in Washington, D.C. where she works as a designer at a local architecture firm. Her most recent work can be found in the art and literary journal, Viator Project.