Emily As Sometimes the Forest Wants the Fire by Darren Demaree 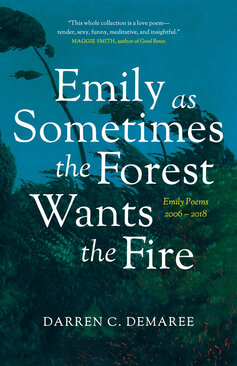 If love were an exercise requiring the eye to see the lover in every impossible thing, if hope was a conceit anchored in beholding, you would have Darren Demaree's Emily As Sometimes the Forest Wants the Fire.

Although Emily is the subject of every poem, it is the poet's gaze which is centered in the lover's way of seeing. Every title includes an analogy or comparison to Emily which is either supported, expanded, developed, or subverted by the poem.

I felt Emily was an active co-conspirator in his imaginings--not an object or a "muse" but an active subject, a partner in guiding the way she wants to be seen. In "Emily as Underneath the Train," Emily dreams aloud with the narrator, and this co-dreaming recurs in several poems in a way that feels conversant, or emphasized by the use of we pronoun:

have we given a name
to that world, the one where
we don't exist together

Long-term love subverts its prior forms and commitments. There is a tension here, a sense in which whiskey, or a previous relationship with alcohol, poses a threat to the present. The poet references this in his resentment for the drink on her breath "each time she came home buzzed" ("Emily as The First Question Is a Blood Question"), and the poet's challenge in "Emily as We Never Learned Why the Scar Stopped":

of whiskey underneath
the furnace unit. Was it her
as a threat? Or was it me

when I used to threaten
everybody? If they were mine,
I maintain, they would empty.


Demaree poems atonement in its rawness rather than its pathos. There is no self-pity in the tone of these poems--there is love as humans make it. In "Emily as I Hope for Another Garden", he writes:

I used to drink
& that means I have no other
friends than the wife
that didn't leave me.

The pain is there, but it doesn't draw the poet's eye away from Emily. Love abandons the safety of old crutches and costumes in the short poem, "Emily as Debris & Sparkle," which I quote in full:

That point
without liquor
& lingerie,
the front door
of comfortable
love, that
is damn scary.

In the ongoing tension between comfort and disinterest, the combustive heat of relationships reforges the partners, and Demaree returns to this point repeatedly, in various forms. What sobriety demands intersects with the anxiety of being chosen again every morning as a partner, as a husband, as a lover, as a father, as a life.

There is the legend he makes of her lost toe in "Emily as Snow on Dark Water", a legend which is not separate from the eros in the poet's longing for connection, the anticipation in "Emily As Dart & Pivot":

It is night
& there are no shadows.
Emily is waiting for me.

In "Emily as The Length of My Gaze," Demaree concludes:

of the human heart,
the scotch
taste of it, that sway

is the real Emily. I see her
all the time. I stare. I have
no idea what created her.

And yet, as a reader, one knows that Emily is the poet's creation, the result of a certain gaze known as love, in all its unknowings.
Darren C. Demaree is a graduate of the College of Wooster, Miami University (MA), and Kent State University (MLIS). He is the recipient of a 2018 Ohio Arts Council Individual Excellence Award, the Louise Bogan Award from Trio House Press, and the Nancy Dew Taylor Award from Emrys Journal.  He is the Managing Editor of the Best of the Net Anthology and Ovenbird Poetry.  He is currently living in Columbus, Ohio with his wife and children.  Emily As Sometimes the Forest Wants the Fire is his eleventh collection of poetry.