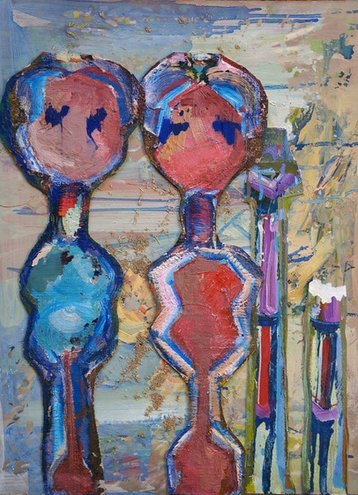 "Untitled" by Leonard Kogan
Sometimes when I'm walking on this street

I want to lie down on that patch of dirt and grass.
I’m tired and lonely. On the bus the other day
we passed by an albino tree. You were next to me
and said we need to go back there and look at it,
then flew out the next day. Does white seem cold
or hot to you. We can pretend the tree was full
of ember. On this street are yellow leaves, cool
and aloof. This morning I woke up shivering.
I’d like to tell you of the dream I had, how
I was on a bus to Anmyeondo. I was alone
but you were next to me when we got to the sea.
I’d like to tell you that we found our way
to the island. But I’ve forgotten everything else.

My friend. You can’t tell me apart
from my sister, my cousin. My friend.
You want to pluck away
at my gut. Digest my origins, crush me
with your teeth.
There are mountains of me.
Fluorescent, inflorescent.
Infrared: mountains of us.
Find me with azalea. Confuse me
with azalea.
Find constellations where I open.
Royal flush
of my skin: you’ve found
my nectar guide. Where I hide
my honey. Touch me underneath
my regalia I’m viscid.
Taste me I’m sweet. You won’t even know
the toxin on your tongue,
in your gut now.
EMILY JUNGMIN YOON's poems and translations have recently appeared or are forthcoming in The Volta, POETRY, The Collagist, The Literary Review, and elsewhere. She is the 2015 winner of Ploughshares' Emerging Writer's Contest, AWP's WC&C Scholarship Competition, and the AAWW Fellowship to The Home School in Miami. She received her BA at the University of Pennsylvania and MFA at New York University, where she served as an Award Editor for the Washington Square Review and as a Starworks Fellow. She serves as Poetry Editor for The Margins, the literary magazine of the Asian American Writers’ Workshop, and is a PhD student in the Department of East Asian Languages and Civilizations at the University of Chicago.
LEONARD KOGAN is an artist who lives and works in Baltimore, MD. Exhibitions of Leonard’s works include “Wall flowers” in Herzliya Museum, “The After Light” at the Andy Warhol Factory in New York, “SUR/FACE/S” at the Nexus Project Gallery in New York, a show at the museum of Yanko-Dada in Israel, “Project Diversity” at the Sputnik Gallery in Brooklyn and others. Leonard’s art has been featured in a number of literary and art magazines, often contributing to the covers. A publication in the Little Patuxent Review issue of “Doubt” features Leonard’s recent works and an interview with the artist.