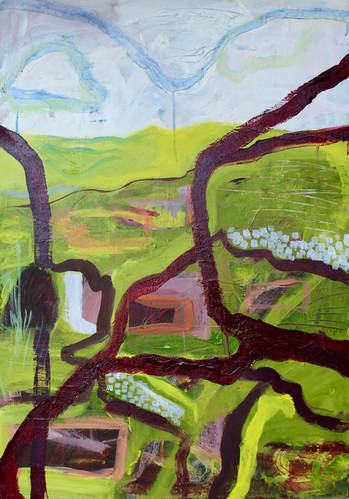 On my worst days I think this will
all be lost. Every last white building

in the street. Call me generation rubble.
Storefronts left unfixed from bombs

something else. My Neapolis.
In the ruins of Jerash we face

the four corners of the world:
Mecca, Jerusalem, Damascus,

the temple of Zeus. Over the hills
are Syria. My father says,

There is no Syria. Not anymore.
And the things now stolen: the statue

Byzantine tiles. The mural was once
a deer. The deer walks away

from me. What I have are sights
and facts: there are not more

stars in the desert, even if it feels
that way. My drawing of a bomb

turns into a lamp. And the temple
of Zeus is used as a military base.

Below our feet are the wonders left
uncovered. Perhaps that keeps them safe.

left in the street. Inheritances left unpaid.
Call me generation half-marble or

generation half-lost. You can’t call
me anything other than hypocrite. Do I feel

safe in the scales of the Empire—I,
a little American thing? Like a reed

in an instrument, the call to prayer shakes
through me. In time, I’ll eat figs

in the airport. In time, I’ll split the Red
Sea. In the street, some children kick

a dog. This is also life. My drawing
of a bomb turned into a lamp.

I use it to light my way home.
Emily Khilfeh is a half-Palestinian poet from Seattle, WA. Her work has previously appeared in Pinwheel, and she was a 2017 fellow at the Bucknell Seminar for Undergraduate Poets.
Perrin Clore Duncan, from Oklahoma, graduated from DePauw University in May 2017 with a B.A. in Economics and Studio Art. Her work has been shown and published in Ireland, the United States, and worldwide through online publications. Perrin currently pursues her M.F.A. at the Burren College of Art in Ireland.
​Visit her on instagram at @perrincloreduncan.art or at her WEBSITE.