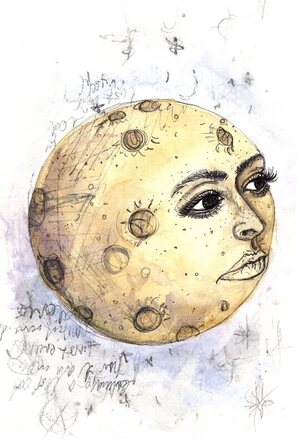 It’s about damn time grass grows
in thickets, about damn time lilies
bloom without asking for forgiveness,
about damn time bees get fat
on their own flutter, about damn
time for whistling honey-drunk
at the neighbors, about damn time
to order in reverse, zipper to angel,
biggest to smallest, about damn
time, for the filagree of a flute,
for flesh without struggling
to contain it, about damn time
for bellies & bikinis, about damn
time for dancing thigh to thigh,
about damn time for the liberation
of summer, about damn time
for the glory of sun, about damn
time for my fat ass to lie out naked
in the blue expanse of about damn time.
Emily Lake Hansen is the author of Home and Other Duty Stations (Kelsay Books) and the chapbook The Way the Body Had to Travel (dancing girl press). Her poetry has appeared in 32 Poems, Hobart, Glass: A Journal of Poetry, Josephine Quarterly, Atticus Review, and The Shore among others. The recipient of the 2022 Longleaf Poetry Fellowship, Hansen lives in Atlanta where she is a PhD student at Georgia State University and an instructor of English at Agnes Scott College.
Larissa Monique Hauck is a queer visual artist who graduated from the Alberta University of the Arts in 2014, where she received a BFA with Distinction. Her artwork has been featured in multiple regional and national group exhibitions as well as a growing number of international exhibitions. She has been selected for inclusion in events such as Nextfest 2018 (Edmonton, AB), Nuit Rose 2016 (Toronto, ON), and the 9th Annual New York City Poetry Festival 2019 (New York, US). Her drawings and paintings have also been featured in publications such as Creative Quarterly (US), Wotisart Magazine (UK), Minerva Rising (US), and various others.