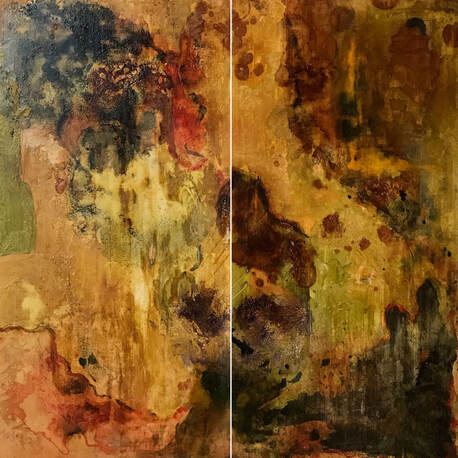 A Line Between Integration and Diaspora #9 by Sinejan Kılıç Buchina

I scrub the burn
from the bellies
of your spoons,
debate just tossing
them out completely
while you watch
Game of Thrones.
I hate how little lives
matter in this show.
Who washes the blades
pulled from dead men’s
necks like tulips
bloomed out a magician’s
sleeve? Sometimes
there’s not a new character
to love instead. I’m afraid
enough to kneel
and shovel your cat’s
litter cakes. Scent cloud
of rotten OJ. Dirty
needles like a fist
of pixie sticks.
But look—it can all
be cleaned again.
On screen a baby
is killed. I’m thankful
you wince here.
Raindrop of relief: if
you gasp, you’re breathing.
Eric Tran is a resident physician in psychiatry in Asheville, NC and received his MFA from UNC Wilmington. He won the 2019 Autumn House Press Emerging Writer’s contest and his debut book of poetry, The Gutter Spread Guide to Prayer, will be published in 2020. His work appears in RHINO, 32 Poems, the Missouri Review and elsewhere.
Sinejan Kılıç Buchina is a NY based artist and visual instructor. She is of Circassian-Abkhazian ancestry, born in Turkey. She received her B.F.A. in Art in Istanbul, and continued her education with programs in London and Berlin, and completed her MA in New York. Buchina has exhibited in galleries and institutions throughout New York, London and Istanbul, and is currently working on evolving projects in New York, Sukhum and Istanbul.