Shaping one's own reality, is in fact, a creative act. And living in a world one has created can be as enjoyable as writing a symphony. Imagine, revise, revive, validate, remember, forget, seek refuge, seek certainty. It is the ongoing search for truth amid illusion. It is creating an elephant from a lump of stone - both difficult, and endlessly meaningful. –Amy Weishaar

Residing in the interstices of realism and idealism, my work is about the act of creating subjective realities. These can be literal- like the exquisitely intentional fabrications of art and theater; or existential- those we craft in an effort to help us perceive and be perceived by others. While simultaneously exploiting the deceptive nature of paint, I allow remnants of the physical and intellectual process to emphasize that the image is an artifice: deliberately constructed, edited, and presented in such a way as to become its own entity. Immediacy functions as a medium: the image continuously evolves as layers of information are added and removed, directly affected by external influences. Equally significant are nuances of construction and editing, artificial adhesion and repair, or ‘jury-rigging’ a convincing cohesiveness, reminiscent of how we build and shape our own individual realities. Parts of the resulting images may be idealized and romanticized while others inherently warped, irrational, and unreliable- much like the way humans perceive of and represent themselves. 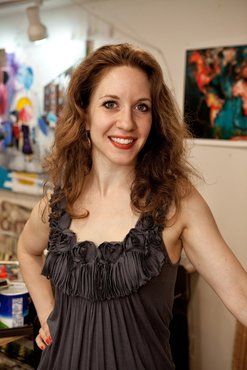 Philadelphia-based painter ERICA HARNEY (b. New York 1984) holds a BFA from Alfred University and MFA from Penn State. She has also studied at the Santa Reparata International School of Art in Florence. Harney has exhibited extensively across the US and internationally and has worked collaboratively with visual artists, musicians, writers, and choreographers.