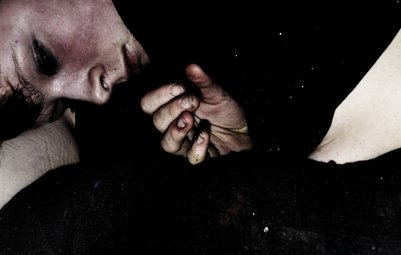 
Let’s turn off the lights and play a game in the dark.
It’s simple. There are no rules. Or we don’t know the rules.
I won’t know where you are and you won’t know where I am.
Let’s fumble toward nothing until we hit something or a wall.

Maybe after a while our eyes will get used to the dark. They will
let in as much light as possible and maybe we will see a mass of
something. What tree would you be if you were a tree?
Pretend you are an unmovable that and I will be an unmovable

something else. We’ll never get at each other. Pretend we just
got into a fight. I bloodied your nose. Pretend I have a paper towel
to clean off your face. Wait, don’t make a sound. I’m coming
up on you from behind maybe. I have my hand raised

and I’m holding something heavy. No, I’m waving a white flag.
I’m gripping my arms around my chest. I’m cold. You’re cold.
I’m trying to figure out how to see you. I’m listening but I don’t
hear anything. I’m there next to you maybe. I’m here flailing around

on the bed. I’m dead. You’re dead. I’m a flash in the pan. I’m
as much yours as you are mine. Pretend you are a mountain
and I’m a goat. Pretend we both jumped in the ocean. Pretend my
hand is merely my own. Let’s turn the lights back on and off.

Let’s catch quick glimpses of what we really look like. I am
a party through a key hole. I am your hand on my waist. Pretend
any of this is really happening. Stumble toward something.
We are both night blind. We can’t see anything. Fumble quietly.
Currently a MFA candidate at New Mexico State University, ERIN CARLYLE holds a MA in literary and textual studies from Bowling Green State University and a graduate certificate in gender and women’s studies from Western Kentucky University. Her work appears in journals such as the Yellow Medicine Review and The Zephyrus.
ELEANOR LEONNE BENNETT is an internationally award winning photographer and visual artist. She was the CIWEM Young Environmental Photographer of the Year 2013 and has also won first places with National Geographic, The World Photography Organisation, Nature's Best Photography and The National Trust. Bennett's photography has been published in the Telegraph, The Guardian, The British Journal of Psychiatry, Life Force Magazine, British Vogue, Harper's Bazaar and as the front cover of books and magazines extensively throughout the world. Her art is globally exhibited, having shown in New York, Paris, London, Rome, Los Angeles, Hong Kong, Copenhagen, Washington, Canada, Spain, Japan and Australia.