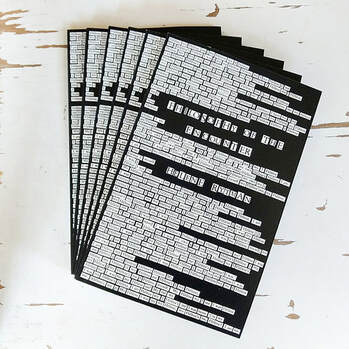 “I cling to this statement of Marx: at all events, ‘history is more imaginative than we are’, and anyway we are reduced to ‘thinking for ourselves’.”

The murder of résistante and sociologist Hélène Rytman at the hands of her husband, Louis Althusser, is both widely known and critically under-investigated. The incident faded into obscurity behind Althusser’s contributions as a Marxist philosopher, diminished by academics as it was by French authorities in 1980. Branded unfit to stand trial due to drug-induced psychosis, Althusser instead spent three years in a psychiatric hospital where he began work on his memoir, The Future Lasts Forever. In it, he recounts his relationship with Rytman, and the evening of her strangulation.

Multimedia artist Tatiana Istomina repurposes this memoir in Fhilosofhy of the Encounter (Pinsapo Press, 2019)—an artist book to accompany her solo show of the same name. Istomina collages Althusser’s manuscript to reassemble it as Rytman’s story told through Rytman’s voice, resulting in a 58-page erasure piece. Listing herself as editor and Rytman as author, Istomina serves as a conduit, challenging the dialectics between spectator and audience, between source material and interpretation. It is an exercise in reclamation. But Fhilosofhy of the Encounter resists genre categorization—even to call it an “artist’s book” undoes the intentional narrative threads that piece together Istomina’s Rytman. The engagement this work asks of its reader isn’t as cut-and-dry as its creation: using both alphabetical and visual text, Fhilosofhy of the Encounter is a post-structuralist feat, and Istomina is a historian of Foucauldian measure.

“People will, of course, believe me when I say my intention is to be as objective as humanly possible. I have no desire to reveal only subjective thoughts and feelings … but hallucinations are also facts.”

Istomina makes every displacement and redaction glaringly evident. The collage construction informs the reader’s experience, calling attention to the process behind the text’s creation, a transparency that builds our trust as readers. When Rytman recalls her early relationship with Althusser, entire paragraphs are redacted, made heavier by the admission, “I was still as poor as ever.”

Some chapters take on concrete construction—words and fragments organized in dizzying arrays, mimicking the discord attributed by critics to The Future Lasts Forever. The arrangement of text becomes increasingly chaotic, culminating in the least legible page which concludes chapter 20. Then, a turn—the remaining chapters, 21 through 23, are visually consistent and straightforward. Here, Istomina’s Rytman walks us through the morning after, so to speak. She tells us that neither her friends nor her husband’s analyst “could believe” he’d killed her. She tells us Althusser spun the act of violence as one of absolute love. She tells us his posturing knew no bounds, that he attributed the incident to her “passively accept[ing] death at his hands” and “unconsciously satisfied [her] desire to end [her] life”.

“In short, what he feared was a catastrophic, public refutation of his position.”

As outlined in Fhilosofhy of the Encounter, Althusser evaded accountability because of his position as a scholar in a movement already under fire. By 1980, all the great Western thinkers were already dead—Foucault, Sartre, Lacan. The French Left rushed to Althusser’s protection, shadowboxing with reasonable doubt in search of empathy both with victim and perpetrator. Reports of the murder were easily warped by the press as evidence of the dangers of Marxism, so the coterie of academia did what they do best: protect their own.

Spared a public trial, Althusser hid away in various clinics, under the guise of his diagnosis. He was allowed to fade into relative obscurity. The Future Lasts Forever is, above all, a carefully curated confession of inadequacy—a final act of self-flagellation in which he repeatedly calls himself a fraud. Althusser, the dramatist. How could he not feel inadequate, having met Rytman, a Communist militant, in her prime. He wrote his memoir in the interest of redemption, for readers to relish in his introspection. Herein lies the essential message behind Istomina’s work, echoing a Jenny Holzer truism: “Abuse Of Power Comes As No Surprise.”
​
To reframe Althusser’s mental gymnastics through Rytman’s pity-stricken tone—a pity he would surely loathe—demands our awareness to the ways in which even counterculture falls victim to the base-superstructure. In a 1996 review of The Future Lasts Forever, Ned Jackson emphasizes Althusser’s inability—or refusal—to “trace links between the institutional and political contexts of his life and the more intimate, personal sphere.” The memoir was, itself, an act of erasure—an intentional collage masquerading as an unintentional revelation. Fhilosofhy of the Encounter is the reverse. The rhetoric of resistance is the language of capitalist empire—“Power is everywhere” and “comes from everywhere,” says Foucault. Istomina’s Rytman doesn’t imply Althusser was a failed theorist but rather a theorist of the state, one who learned to recuperate language for his own agenda—i.e., depoliticize a murder in cold blood and wax poetic about the death drive.
Tatiana Istomina is a multimedia artist and writer living in New York. Her projects have been featured in exhibitions and screenings across the US and abroad; venues include Moscow Museum of Modern Art, Blue Star Contemporary Art Museum, the Drawing Center, and the Bronx Museum. Istomina is a recipient of numerous awards such as the AAF Prize for Fine Arts, Joan Mitchell Foundation grant, and the Chenven foundation grant. Sshe holds a PhD in geophysics from Yale University (2010) and MFA from Parsons New School (2011).