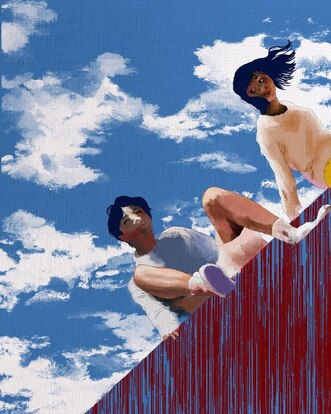 Bridges
We find you on the bridge
we used to spit on cars from.
There, on the railing, you sat
like a gargoyle, a dark water
beneath you. One grabs you
by the neck, I grab you by
the waist, another watches.
Your neck is steaming
and your clothes are cool,
and your eyes are watered
and bright in the moonlight.
I like to think we caught you
on time. On the ride home,
moths fly antennae first into the headlights
causing the street ahead to shutter.
An Apology
I didn’t curse the name that cursed
you and for that I am sorry.

It was comical, almost;
a record scratch moment.

He said, that [I will not speak a word
that does not belong to me] ain’t worth shit.

I knew he had responses like a gun
at the hip: ready to shoot when needed.

The it’s just a word.
Or the no offense tho.
Perhaps the am I right?
Silence.

But when our eyes met,
and the moment came,

I pointed to my ear
as if the word missed me.

which, again, is why I am apologizing
because we are brown and already disappearing.
Read more of Gabriel Mundo's work in issue #48 of UtSQ.
Gabriel Mundo is a poet and writer. He is currently an MFA candidate at the University of Mississippi.
​Kelly Emmrich is an illustrator and animator living and working in the Blue Ridge Mountains. Her work has appeared in the magazines Moonhood Magazine, Dream Noir, and Meat for Tea. She studied creative writing and animation at the University of Mary Washington. She is currently working as a beer label designer for a microbrewery in Afton, Virginia and also as a freelance animator and illustrator.