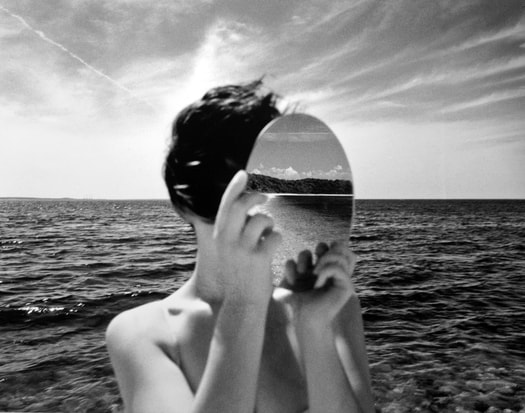 after her funeral, my mother lives forever
in the bricked-up chamber
of my father’s camera,       negative
& undeveloped.              body as ink traced on silver
lamina.    body as final verdict against
the fiction of decay.     never mind my father
locking heaven away in a strongbox.
never mind grief licking his heart
down to a pale pearl.             i imagine the frames
each one      a painstakingly planked dove house
from which my mother looks out, her face a lighthouse
on the island of memory      around which
her unspent years       hover in ghost orbs.        somewhere
along the wound-up strip of dark windows, she lies
spread-eagled on a frozen lake       while the shadow
of her future self swims past her under ice
as a sly grin makes her face blossom        into light.
oh mama dove            snow angel
tell me this is not the life you’ve always wanted.
Telemachus dreams of the great flood

if each dream is a thoroughbred, then
the mind is a poor stable to house such beasts.

in my dream, a great flood combs through the streets
like a fat tongue pushing through loose teeth
& on an uprooted red oak tree
two ravens plead, their hunger echoing & keen
as a cutlass.

in one of the houses buoyed by the flood
where a single lamp flickers like the heart
of a gold wasp,
a man bending over the kitchen sink
rinses his kidney stones carefully
until each pain-pebble is smooth
as the cloudless lens of an eye.

he names them
after the Jovian moons:  Io, Callisto, Europa,
his voice brushing over the vowels like god running
the scabbed tip of his thumb over the wind’s dull blade
on the third day of creation.

in that same dream, my father is the flood
sweeping through the neighborhood.

but he’s also the man bending over the sink
holding down the head of a beast—a horse,
a drunk god, a history—until its limbs
slacken like mooring ropes untied.

he watches the water’s strange navel, the sink
emptying itself in steady swirls
while outside, the great flood plants the house
gently at a crossroad before it drains away.

across the sidewalk, the oak lies flat & echoless.
my father dries his hands on his apron.
his hands are the ravens.
Gavin Yuan Gao graduated with BA in Literature and Creative Writing from University of Michigan. His writing was highly commended in the 2018 SLQ Young Writers Award (age group 18-24) and has been nominated for a Pushcart Prize. His work is forthcoming or has appeared in New England Review, Michigan Quarterly Review, The Journal, Dunes Review, Up the Staircase Quarterly, Hobart, Sundog Lit, Poet Lore, Winter Tangerine, and elsewhere.
​​​Julia Forrest is a Brooklyn based artist. She works strictly in film and prints in a darkroom she built within her apartment. Her own art has always been her top priority in life and in this digital world, she will continue to work with old processing. Anything can simply be done in photoshop, she prefers to take the camera, a tool of showing reality, and experiment with what she can do in front of the lens. Julia is currently working as a teaching artist at the Brooklyn Museum, Medgar Evers College, USDAN Art Center and Lehigh University. As an instructor, she thinks it is important to understand that a person can constantly stretch and push the boundaries of their ideas with whatever medium of art they choose. Her goal is for her audience to not only enjoy learning about photography, but to see the world in an entirely new way and continue to develop a future interest in the arts.  You can find her at her WEBSITE and on instagram: @Juliajuliaajuliaa