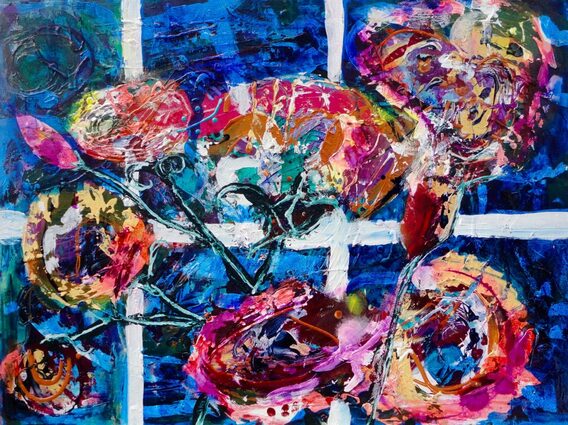 "That Time You Brought Me Flowers" by Jenn Ashton

One time, my father, crying, drove into the dusk

as if a brightness rippled inside his skull
like the quivering of certain wings.

hurtled like a bruised fist
until there was no dusk or road at all.

was measured carefully against grief.
Private to a fault, my father dug

so deeply to bury his wounds
it seemed that, even in the keen eyes

of our kith & kin, he did not love her.
But he did. In his slow, watchful way,

recalling the rain’s cellophane fingers
dimpling the water in our bird bath,

balanced on the window ledge,
& my mother—the hostess,

into the sourdough, kneading her
hums & laughter into the hearts

as an icicle in a summer town. That
was a lifetime ago. After the funeral,

my father stood in the emptiness
of the same kitchen: everywhere he turned,

puncturing the silence of a valley. If only
he knew how to dissolve, how to seep into

the ocean like the shadow of an albatross
& teach her bones to unwilt.

away, before his hands softened their grip
on the steering wheel as the car dove

straight into the roadside crops.
A trail of smoke rose from the engine

like the husky voice of the devil
crooning his weary blues on the car radio.

My father climbed out from the wreck,
shouldering his way through the cornstalks

in a daze. He licked the wind off his lips
& it tasted brackish as loss.

Still, the future fanned out before him like
the wind-combed field, awaiting him

from the arms of the living.
Over the blackening field

the moon bloomed, elegant & cruel
as a harvest of ivory.

the moon was his.
Brimming

Twenty-three years of dreaming
someone else’s dream. Today, I want to wake
& be filled with love for
my unremarkable life. Learn to love
the fridge hum. The engine thrum.
Even the tick-tocks of the mantle clock
that are never in sync
with my heart’s feral rhythm.
At the farmers market, I trace
my hand across the cheeks
of truss tomatoes & lift the sky
to my lip like a brimming cup
of light. The air eddies
in sticky pockets of heat, dangerous
& sweet. It licks me all over like the prickly
tongue of my first foster cat.
Nothing is new here, yet, still,
everything feels unspoken for.
The river I crossed a thousand
times as a child & named tough
love goes on with its muddy talk, rambling
like my father when I returned home
one afternoon, shoeless
with blood-streaked feet.
Watch your feet, the water chirps
its caution but I take no heed.
I let the bright wind unzip me
along the sternum
as I run down the pebbled bank
under a leaping antelope cloud
past the broken-glass horizon
back into the soft body of my child-self
until my breath can’t catch me
& I feel like I could even
outrun my own death.
Gavin Yuan Gao recently graduated with BA in Literature and Creative Writing from University of Michigan. His writing was highly commended in the 2018 SLQ Young Writers Award and has been nominated for a Pushcart Prize. His work is forthcoming or has appeared in New England Review, Michigan Quarterly Review, The Journal, Hobart, wildness, Poet Lore, and elsewhere.
North Vancouver, B.C. Artist, and Author Jenn Ashton has lived a creative life that has encompassed everything from farming to the Boardroom; from BC to Harvard and back again. Coming from an artistic family she has brought a creative flair to all her projects large and small. Jenn is known for her originality, resourcefulness, and vision.  JennAshtonArt.com