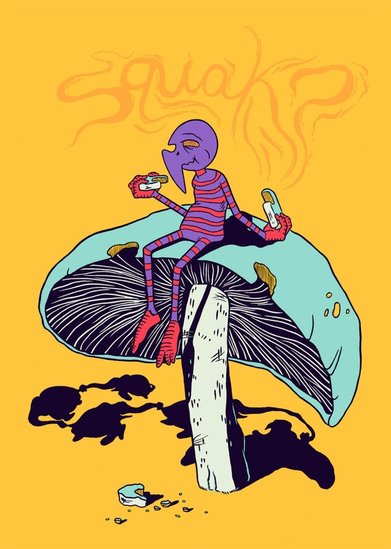 
the inside of a coconut is whiter than snow.
the evening misses the moon the way a honeybee
misses pollen, the way i miss color.

biting into a boysenberry, juice streaks
down my chin like black ink
and rain.

we’re living inside a cartoon.
last night, i dreamt we hiked up runyon
canyon with the smurfs.

your blue skin complemented my violet hair.
you chuckle, tossing me a pack
of crayolas in a ziploc.

i color stop signs-teal, exit routes-orange.
i draw cars weaving in and out of the 405,
turnpikes leading me out of mazes.

at the crossroad of reality and make-believe,
you whisper, go green light.
my jeep wrangler rams into a tall redwood.

the world spins like a merry go round.
you yell, visualize green, it won't hurt as much.
watermelon rinds, jade bangles, emerald gems--

you know me. damn, you know too much.
green alleviates pain
as morning mist evaporates.

surreal--
a multicolored arch stretches above a bridge.
lock me up in a 6 x 8 cell.

i just murdered a tree and the sky unveils
the prettiest rainbow.
HA KIET CHAU is a writer from Northern California. Her poems have been published in New Madrid, Ploughshares, Mission at Tenth, Sierra Nevada Review, and Kalyani Magazine, among others. She is also a recipient of the 2014-2015 UCLA Extension Writers’ Program Scholarship. Her chapbook, Woman, Come Undone, is available from Mouthfeel Press. For more of her work, visit her at http://hapoetryblog.tumblr.com/
ALEXANDRA BEGUEZ is an illustrator, cartoonist and mythographer based in New Jersey. She has a love for bright colors, science fiction, hoofed beasts, potatoes and cautionary tales. Her comics and illustrations appear in Little Nemo: Dream Another Dream, Quarter Moon, Ink Brick and Carboncito. She has received an Honorable Mention from the Society of Illustrators of Los Angeles Illustration West 53 and a 2014 MoCCA Arts Festival Award of Excellence, as well as having work featured in the Society of Illustrators 2015 Comic and Cartoon Annual. Recently, her work was chosen to be included on Latin American Ilustración 4’s online collection, The ARCHIVE. She is currently enrolled in the MFA Visual Narrative program at the School of Visual Arts.