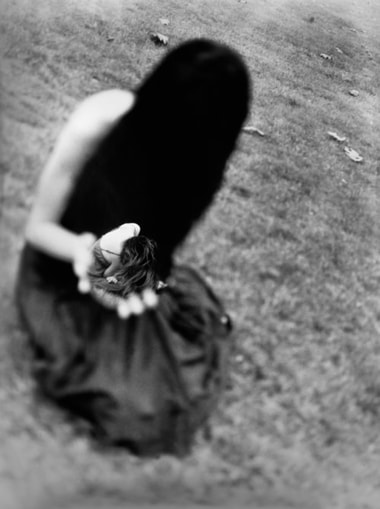 The Origin of Mourning

It all began like a love story,                     snow perched on flowers swaying so well you would know
they have become rare for all the anthers that got blown away. the origin of mourning ends
where it all began [in-between],          consciousness wrapped in foils.           I have managed to
close my eyes to retain this weight, but I see candles burning their wax slowly on a restaurant table.
outside, a bird hits her beak on the glass window,      the bird sees herself and will not let her
reflection remain – unsure,     she might not make it back home, if half herself remains
where no one ever looks for anything with wings. the flames grow taller and now I see her face,
a bulb of garlic pulled from the ground           soaked in red.  did love make us see any better,
or did it blind us from telling apart      dimples and scars?
the world grows fatter on missing memories, I still have the keys to the room            where we
stored the aerial photographs of how the world looks at night, when everyone craves a home.
everywhere is dark, except for the candles in the restaurant.                 the origin of mourning
is the burning that does not eat up your eyes. it began when our shadows were the only map
we know. they grow taller, sometimes they walk behind and then shoulder to shoulder we match
with our sore gaits. The origin of mourning has nothing to do with death,   it began in a war –
that could only be won with kisses and hugs.                  there is no man holding his children to his
chest, scared to know that all his stories about home are soluble in the salt water.
this has nothing to do with betrayal,   or the lack of a love song for refugees,
or the debate of whether the solution for the cats we left behind       is to buy new cats and name
them after the months we crossed the sea.      the origin of mourning began when the boy grew
taller than his father.   the origin of mourning may also begin with theories about why the moon
does not feel hot, even when it shines brightest.          the origin of mourning began when the girl
in the restaurant closes her eyes         until her eye lids thinned out. the fire eats up her hair,
and the fire extinguishers in the restaurant were faulty and the waiters are too busy
serving coffee. I noticed the bird returned at night, straining to see how different she is,
from her reflection.       the girl spills the tea when she opens her mouth to breathe,
I fear nothing about the night                 and the moon that was our night-watch.
but I fear the ground under my feet,               for swallowing her body without spilling her heart.
when it rains, the Qur’an gets soaked,           and our tongues are the pages of a diary
that will be found many years away,               wrinkled                           at the pit of the sea
we so much want to cross,                                   because we thought to have learned how to swim.
A Date with the Exorcist

The coffee in the urn gets cold,          and these tongues could only make prayers
for what got swallowed in the wind.  each time she points somewhere outside the moving car,
her body turns an amphitheater that soon becomes a market square, since all the men she loved
sought God in their own pockets.        the exorcist promised on the grave of his blind father,
to purge out the iska in her body without hurting her lungs.              no matter how calm it may
seem, the sea paddles its waves                  it’s difficult to decipher whether the roaring tide
outside the window    celebrates the new bride, or is angry that she had her tongue cut out,
when she most needed to tell how she dreamed of herself, drowning in a dye bath.
I hear her cry, no matter how hard I shut my ears. she came out with her body incised
with the map of the world before the war.       I drove home in silence, she caught my eyes
from the rearview;       look, it’s about to rain.           the mirage on the road reminds me
of the flood that swept our home to the bottom of the sea. but flood is no longer a disaster,
we’ve all learned to swim.      I asked too much of her tongue because she’s as calm
as the beach after a tsunami.   for long, I have mistaken her silence as a sign of love.
Hussain Ahmed is a Nigerian writer and environmentalist. His poems are featured or forthcoming in Prairie Schooner, Cincinnati Review, The Journal, Cream City Review, Magma and elsewhere.
​​​Julia Forrest is a Brooklyn based artist. She works strictly in film and prints in a darkroom she built within her apartment. Her own art has always been her top priority in life and in this digital world, she will continue to work with old processing. Anything can simply be done in photoshop, she prefers to take the camera, a tool of showing reality, and experiment with what she can do in front of the lens. Julia is currently working as a teaching artist at the Brooklyn Museum, Medgar Evers College, USDAN Art Center and Lehigh University. As an instructor, she thinks it is important to understand that a person can constantly stretch and push the boundaries of their ideas with whatever medium of art they choose. Her goal is for her audience to not only enjoy learning about photography, but to see the world in an entirely new way and continue to develop a future interest in the arts.  You can find her at her WEBSITE and on instagram: @Juliajuliaajuliaa