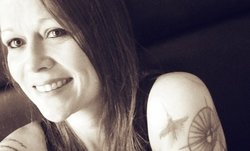 Up the Staircase Quarterly:  Jeanann, thanks so much for taking time out of your busy schedule to join us for this interview!

Your latest book, Said the Manic to the Muse, was released earlier this year by Write Bloody Publishing. Before I started reading your book, I was aware that you are also an established performance poet. I feel that your voice is strong and eloquent on the page, but that the majority of these pieces would also make for some stunning performance poetry. How much of your poetry do you perform? What makes a great performance poem?

Jeanann Verlee: Thank you greatly for your kindness! I am of the opinion that most poems can successfully be performed/recited aloud when given proper attention. I attempt to read/perform most of my poems at one time or another, depending on the environment and where each is in the editing process. The key to performance is understanding that the listener has only one opportunity to hear the poem in the moment of recitation—they cannot return to the page to clarify a muddled word or study form or unpack a complex phrase delivered too quickly, so it is the poet’s task to give the performance every focused nuance to allow the listener access/comprehension. Understandably, poems that rely less on form/page layout to reveal their meaning tend to be more effective audibly, but I believe it’s worthwhile to try new ways of exploring even the most intricate written structures aloud.

UtSQ: One of my favorite poems from Said the Manic to the Muse was “Lessons in Alone.” The rhythm of your lines perfectly matched the cycle of the speaker, the routine of going to the bar, walking the dog, and remaining busy:

Do not think how lovely their dark will lay against your sheets.
Do not ask to touch during sleep, it smells like love
and you have a suitcase to unpack. You have laundry
and dishes and a dog to walk. You are busy. Stay busy.

I felt that a major theme throughout this book, and obviously this particular poem, was solitude. Why was this theme important for you to explore? What other themes felt essential for you to include in this collection?

JV:  This collection is a focused examination of one year in my life after unexpected abandonment propelled me into severe bouts of mania and depression (I live with bipolar disorder)—much of which was rooted in an unrelenting and agonizing fear of aging beyond fertility. As such, the ongoing echo of solitude within these poems is absolute, yes. In examining the stories of this experience through poems—as with my first book, Racing Hummingbirds, and much of my writing—other pervasive themes within my life endure: rage, suicidality, sex, abuse, violence, childlessness, and a deeply conflicted maternal relationship. The collection is sectioned to illustrate the progression of illness through core themes: abandonment & motherhood/fertility, manic response to grief, extreme episodes of mania and depression (each introduced by disparate archetypes, respectively: Medea, Jezebel, and Kali). 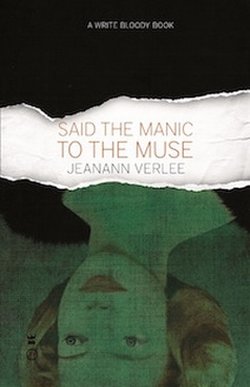 UtSQ:  By doing a little bit of research, I found that you have commented in past interviews about living with bipolar disorder. The last section of this book focuses on mania and manic episodes with poems such as “Mania Speaks,” “Wherein the Author Provides Footnotes and Bibliographic Citation…,” “The Voices,” “Manic,” etc. Overall, this is an exquisitely dark collection of poems. Can you discuss how more extreme moods associated with bipolar disorder impact your writing and more specifically the creation of Said the Manic to the Muse?

JV:  Because the impact of my illness fuels the entire collection, this echoes my answer to the previous question. How I navigate the world, everything I encounter, and everything I write is influenced by this illness—and this collection is a one-year snapshot of that. Again, much of my work addresses similar themes, but this book puts it under a microscope.

And while it is a challenge to write these episodes effectively, I would be dishonest to try telling this story without exploring/illuminating the worst of it—the most extreme/uprooting episodes, which is most certainly what the last section is working to do. Writing the moods in real-time is a visceral, living process which can sometimes be satiating. But while there are moods and manias that compel me to write in the moment, others are too intense. Bluntly, they must be survived first and chronicled later.

Additionally, while manic writing can be thrilling, rash—words and ideas coming with a force, it doesn’t always succeed. All poems, of course, must be revisited again and again to hone but those initiated during episodes must later be filtered through a more sedate and objective eye. An eye to craft and intent. I am a sucker for writing that employs showing over telling, it allows me as reader to step inside the writing, to emotionally access the moment. I work to do this in my own poems, to offer a more acute access point and understanding for readers—whether they live with mental illness or not.

UtSQ:  What is next for you professionally? What are some projects you are working on now?

JV:  I am currently working on a third poetry collection that examines predatory trauma—with a focus on physical and sexual predation. It has been a long time in process, but has much further to go. I’ve also been writing more prose (nonfiction opinion/essay) in recent years, taking a long(er)-form look at topics such as intersectional feminism, sexual trauma, racism, and violence. And I’m perpetually experimenting with children’s literature.

UtSQ:  Now let’s jump to the beginning. What was your first significant literary encounter? How did this experience inspire you, or shape you, into the writer you have become?

JV:  After asking you for a little clarification on this question, I sat with it a while to really dig through. There are a number of literary pieces that stand out, but I honestly don’t recall which might have been the start—the true “first” poem/story/book/song/film/etc. But through the process of revisiting all these memories, I remembered one pivotal experience in middle school that certainly informs the way I approach and examine literature.

I was in a fairly experimental 8th grade literature class in which the teacher—Mr. Foster, I believe—challenged us to apply sociological and philosophical thought to given texts, and actively debate our theories. We were asked to read the short story, “The Most Dangerous Game” by Richard Connell (a 1924 tale about hunting humans for sport), then debate which of the two lead characters, General Zaroff (hunter) or Sanger Rainsford (hunted) was stronger. Turned out, my best friend, Amber, and I vehemently disagreed. We launched into it, examining every detail, character traits and behaviors, strengths, weaknesses, the profoundly troubling ethical deviation governing the entire story. We argued and argued, elucidated our points, tried to persuade, eventually shouted, even cried in frustration. We were both so engaged by the larger meaning of the story and so emotionally invested in the debate question, neither of us could yield. We continued the debate well past class, long after other students dispersed—all the while, Mr. Foster sat watching, hands folded across his stomach, wearing a self-congratulatory smirk. And he earned that. He had found the right amalgam to spark fervor in two students. The question that made us care. He couldn’t have known ahead of class this would be it, nor what might stimulate the same in the next pair of students, but on this day, he had done his job. Brilliantly.

Amber and I never came to agreement. Neither of us settled. Ever. I believe we spent a few quiet days in stubborn reflection, flabbergasted that the other could possibly disagree—and eventually accepted we would remain unswayed. What struck me most about this memory, though, is not the story itself, but how deeply the story’s greater social implications mattered to me. It’s just a story, right? Fiction. A series of invented characters and circumstances I could walk away from and forget I ever read. But, can I? Would I want to? Will I be internalizing the debate of strength of character—personal will and ethical code—for the rest of my life? Yes.

It mattered. Tremendously. And isn’t that at the core of why we as writers choose to write? Whether through fiction or poetics, essay, novel, song—to explore what matters? We write to better understand and to better be understood. We write to engage the thinker, to charge the body politic, to haunt the predator, to invoke healing or at least wisdom. And what greater can we do individually than evoke that spark? Than posit a conundrum in reflection of which others might interrogate themselves—their own merits and flaws? Are we changing the world? I don’t know. But I hope one day a young thinker might lean in and tear at the seams of something I’ve built in effort to make themselves stronger.

UtSQ:  Who inspires you now? What small press poets should we be reading? What makes them stand out?


Each poet here stands out in how they elect to defy the rules of language. Not only are the stories they tell compelling, but they’re masterfully built in astonishing new ways. These poets push limits with new ways of seeing and new ways of speaking. Every day, brand new.

UtSQ:  Finally, Jeanann, if you could have a meal with anyone, dead or alive, real or imaginary, whom would it be, what would you talk about, and what on earth would the two of you eat?

JV:  Ah! Impossible to give a singular answer. My father. My partner. My would-be child. Absent friends. Former friends. Cross-continent friends. James Baldwin. Johnette Napolitano. Roxane Gay. Jello Biafra. Claudia Rankine. Richard Sherman. Any individual named in my last answer. We’d talk about poems and racism and intersectional feminism and animal welfare and fear and trauma and courage and lament and ambition. I don’t know what they would eat. I’d probably order bean and cheese tacos. And cheap beer.

JEANANN VERLEE is author of Said the Manic to the Muse and Racing Hummingbirds, which earned the Independent Publisher Book Award Silver Medal for poetry. She has also been awarded the Third Coast Poetry Prize and the Sandy Crimmins National Prize for Poetry. Her work has appeared in failbetter, Adroit, Rattle, and PANK, among others. Verlee has worked as poetry editor for Union Station Magazine, For Some Time Now: Performance Poets of New York City, and Winter Tangerine Review: Fragments of Persephone, in addition to a number of individual collections. For eight years, she served as director of the Urbana Poetry Slam reading series, where she also acted as writing and performance coach. She has performed and facilitated workshops at schools, theaters, libraries, bookstores, and dive bars across North America. Verlee wears polka dots and kisses Rottweilers. She believes in you. Find her at jeanannverlee.com.