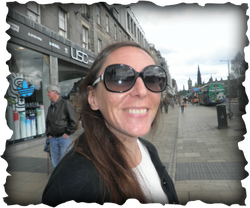 
Up the Staircase Quarterly:  Thanks so much for joining me for this interview, Kristina! We are here to discuss your new book, Scorched Altar: Selected Poems & Stories 2007-2014.

The twelve sections of this book were originally published separately. However, there seems to be a common and seamless narrative, a story that continues, mirrors, elaborates, and grows throughout the book. Was it always your intention to bring these stories together into one collection? How did you select which pieces would make it into Scorched Altar?

Kristina Marie Darling:  That's a great question.  My poems often take the form of footnotes, glossaries, and appendices that belong to absent, missing, or otherwise mislaid texts.  I think of the imaginary text, the book that these bits of marginalia and tiny fragments belong to, as the ongoing work.  So my poems continue to imagine, and orbit around, the same imaginary text.  I don't think that it will ever be fully imagined, or entirely realized.  But it did seem fitting that the twelve related volumes were collected into one book, so as to offer a fuller picture of the world I have been imagining for the past few years.

UTSQ:  Which writers, books, films, or music influenced your writing over the course of creating Scorched Altar?

KMD:  There are too many to name, but for starters, Jenny Boully's The Body: An Essay showed me what is possible within the marginal spaces of a book. Also, Simone Muench's beautifully fractured prose poems helped me realize that poems can work against, undermine, and toy with readerly expectations of a given literary form.  And I'm a huge Wes Anderson fan.  The Royal Tenenbaums helped me appreciate dark humor, which is also a recurring theme in the footnotes.  Lastly, classical music, and the material culture surrounding it (dimly lit concert halls, red velvet chairs, gloved hands...) provided a vocabulary of imagery as I filled the footnotes and glossaries with unexpected content.

UTSQ:  I found an exciting symmetry in your writing. Along with a hypnotic repetition of lines, phrases, and images over the course of the book, you also demonstrated symmetry within each individual “chapter.” In your first section, from Night Songs, for example, I noticed you used the word “night” once and then subtly contrasted lightness and darkness in every poem except for the last one. A similar technique was used in from Requited. Every poem (except for the first and last one) asked a question without the use of a question mark. The effect was powerful. Elaborate on your use of the symmetry technique and its importance for Scorched Altar as a complete narrative.

KMD: I'm intrigued by both symmetry and asymmetry within a literary text.   For me, symmetry offers a way of creating an expectation on the part of the reader that things will continue in exactly the same way that they began.  What's great about this kind of preconceived expectation on the part of the reader is that it affords you the opportunity to surprise them.  Just when the audience becomes comfortable within the various patterns I've created, I love to do something very strange to make them question their preconceived ideas about how the text will unfold.  I like to think that my poems are an attempt to foster more open-minded reading practices, to show the reader that anything is possible within a poem, fiction, or essay.

UTSQ:  Many everyday objects make repeat appearances throughout Scorched Altar:  jewelry, a notebook, flowers, a button. However, you managed to make these objects tell a different story each time. Sometimes the objects would signify pain, sometimes confusion or even joy. The settings and scenes might change, but those same objects were always present, and the underlying thoughts of your characters often mirrored one another. What were you hoping your readers would take away from this experience?

KMD:  I've always been intrigued by the emotional weight that we attached to the most commonplace objects.  A dress, for example, seems ordinary, yet signifies so much:  femininity, ornamentation, desire....  I try to call attention to the ways the meaning we attach to seemingly mundane things---a dress, a locket, a broken clasp---is constructed, and reveals less about the object than the person beholding it.  I hope that the reader takes away at least some notion of subjectivity, as the emotional meaning we attached the various artifacts that surround us can change almost instantaneously.   ​ 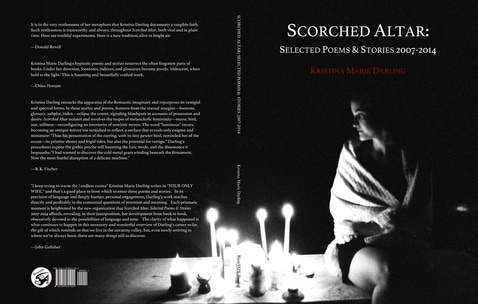 UTSQ:  Your ability to deeply involve me as a reader was impressive. I felt that this was due to your unique deconstruction of a typical reading experience. I especially enjoyed your glossaries and witnessing familiar words being redefined to meet the needs of the story. How did the idea to use glossaries, subplots, footnotes, indexes, and large amounts of white space, come to you? Was it an idea that developed over time and with experimentation, or was it more of an immediate and calculated adaption?

KMD:  Thank you for the kind words about my work.  My interest in glossaries, footnotes, and indexes actually grew out of my life as a scholar.  I'm currently working toward a Ph.D. in Poetics at SUNY-Buffalo, and research the ways that modernist women poets use form and technique to comment on the philosophical debates of their time period.  But there are many problems with scholarly forms of writing, as they frequently operate on acts of exclusion.  One can probably name many things that don't belong in an academic paper:  autobiography, aestheticized language, and experimentation with received forms of discourse, to name just a few.  As a woman working toward an academic degree, I have a particular investment in making these forms of writing more inclusive.  My interest in presenting unexpected content within the familiar form of the footnote certainly developed out of my own experiences as a woman in academia.

UTSQ:  I also found quite a few allusions to the concept of reality vs. the imaginary, particularly for your female characters. I viewed it as a complex symptom of grief. What were you hoping to convey by introducing this concept?

KMD:  I'm very interested in where the distinction exists between the two.  I believe that the boundaries between real and imagined are fluid and constantly in flux.  In my opinion, grief is usually what blurs this boundary, as well as our ability to perceive exactly where the boundary lies.  I'm also intrigued by the ways that the boundaries between reality and imagination are gendered, as madness is frequently coded as female.  Most of my poems attempt to interrogate the ways that the cultural beliefs surrounding femininity invite this blurring of boundaries, and the extent to which women are conditioned to experience grief in such a way.

UTSQ:  In from Compendium I ran across a fascinating line that I was hoping you could elaborate a little more on. “For the work to succeed, one must recognize the difference between life and art.” (37) How does this idea compare to your own personal philosophy on writing?

KMD:  Thank you for your careful reading of Compendium.  The passage you quoted certainly arises out of my personal philosophy on writing.  It's crucial to remember the difference between life and art, because anything is possible within the realm of literature. Real life, not so much!

UTSQ:  Now for a little about you! You have had a lot of successes in your writing career. How did it begin? What was your first significant literary encounter? How did this experience inspire you, or shape you, into the writer you have become?

KMD:  I almost didn't become a writer at all.  I was in love with a horrible male hipster poet who will remain unnamed.  He constantly told me that my work was unimportant, and generally not worthwhile.  Then he decided to apply to Yaddo, and said maybe I should come too, if I could get off the waiting list.  So I applied the night before the deadline.  Months passed.  He was rejected (not even waitlisted!) and I was accepted with my first choice of dates and a small travel stipend.  Still, I almost didn't get on the plane to go, because he wasn't going to be there.

Going to Yaddo was a life changing experience for me.  The invitation showed me for the first time that my writing had value and showed promise.  And actually going there, and meeting writers, artists, opera composers, and dramaturges really expanded my horizons and taught me to experiment even more within my poetry.  It helped me to see how relevant other artistic disciplines are to creating literature.  The uninterrupted time to write resulted in an entire book, and the writing process there helped me better understand how to structure a longer manuscript, which seemed unwieldy and unconquerable at the time.

UTSQ:  What projects are you currently working on? What’s next for you?

KMD:  I'm currently hard at work on a collaboration with visual artist, photographer, and costumer Max Avi Kaplan.  The work is a feminist response to/reframing of/erasure of Vladimir Nabokov's Lolita.  The fragmentary poems in this volume recast the famed novel from Lo's perspective.  And Max's stunning photographs explore themes of (dis)embodiment within Lolita, as Nabokov frequently describes her in only fragments (a honey colored limb, a knobby knee...).  It's scheduled for publication in 2015 by Negative Capability Press.  I hope you'll check it out!

UTSQ: Finally, Kristina, if you could have a meal with anyone, dead or alive, real or imaginary, whom would it be, what would you talk about, and what on earth would the two of you eat?

KMD:  I would love to hear about H.D.'s many romantic relationships with male Modernists over tea and French pastries.  Now the question is what would I wear...?! ​
​Kristina Marie Darling is the author of twenty books, which include Melancholia (An Essay) (Ravenna Press, 2012), Petrarchan (BlazeVOX Books, 2013), and Scorched Altar: Selected Poems and Stories 2007-2014 (BlazeVOX Books, 2014).  Her awards include fellowships from Yaddo, the Ucross Foundation, the Helene Wurlitzer Foundation, and the Hawthornden Castle International Retreat for Writers, as well as grants from the Kittredge Fund and the Elizabeth George Foundation.  She was recently selected as a Visiting Artist at the American Academy in Rome.