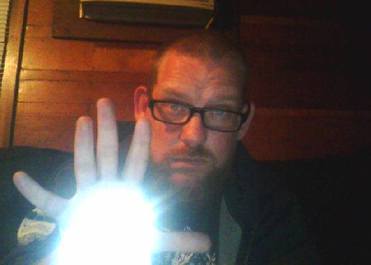 ​ROB STURMA is the Stan Lee of the pop culture poetry journal FreezeRay and its print offshoot FreezeRay Press.  He curated and edited Aim For The Head, a zombie-themed poetry anthology andMultiVerse (superhero poems!) for Write Bloody Publishing, and is also the creator and curator of the poetry-meets-wrestling show Extreme Championship Poetry (last seen at the 2014 Individual World Poetry Slam).  His new chapbook Why You Tread Water is available from Tired Hearts Press.  His work can be seen online currently at Drunk In A Midnight Choir, The Harpoon Review,  Borderline, Ghost House Review, and on XBox Live.   He lives in Oklahoma City, OK, where he co-hosts the Red Dirt Wayward Poets open mic and treats every meal like he's the Chopped Champion.  Check him out at THIS CRAZY WEBSITE:  http://robsturma.weebly.com/
Sebastian H. Paramo:  Let's start with, why did you start FreezeRay Poetry?

Rob Sturma:  In 2010, I edited an anthology of zombie poetry for Write Bloody Publishing called Aim For The Head.  It was a project I started on a whim as I was way into the whole zombie subculture and I thought that it’d be fun to have some friends send me their version of a zombie poem (disclaimer:  I have some pretty talented friends).   I had two revelations in assembling that book:  1. The quality of the material I received was much more substantive than I expected or hoped for, and 2. That book helped introduce a lot of people who don’t read poetry at all to a lot of great contemporary poetry.  Aim ended up doing so well it was even used in a number of college English courses.  I then set about to do the same thing but with superhero poetry (MultiVerse was recently released by Write Bloody as well), and I brought in a co-editor (Providence poet Ryk McIntyre) because the submissions were legion and I wanted a strong follow up to the zombie book.   By the time we were finishing the manuscript for MultiVerse, I kept thinking of other possible themed anthologies, and just decided to see if I couldn’t try a journal solely based on pop culture themed material.  I thought we’d put out a few issues, and that’d be that.  The response from both readers and submitters has been nothing less than humbling since Day One.


SHP:  I really like the name of your magazine. Can you tell me about the name FreezeRay Poetry and how you came up with it?

RS:  Like a lot of nerds, I’m a big Joss Whedon fan, and I’m even more obsessed with his supervillain musical Dr Horrible’s Sing Along Blog.   One of the songs, “My Freeze Ray” contains the line with my freeze ray I can stop/ the pain, and that’s hopefully what our little mag accomplishes.  Though we’ve had plenty of deadly serious takes on pop culture inspired poetry, the idea of reading a journal where you may have an ode to Super Mario or a suite of Gene Hackman poems lets people’s guards down and hopefully we keep the bar high for quality poetry in the process.


SHP:  Pop culture seems to be an unlikely thing that people would associate with poetry, is your goal to change that?

RS:  Absolutely.   I’ve always been a fan of any form of art that has the “spoonful of sugar” aesthetic.  KRS-One coined the term “edutainment”, and that idea was the blueprint for what we’re doing at FreezeRay. It’s not about being didactic or “tricking” someone into reading poetry, but if that’s what happens, awesome. What I find when I visit classrooms is that sharing poems rooted in pop culture is a great way to show young writers that they can write about anything that they feel passionate.  Even Legend of Zelda.  Even Gilmore Girls.


SHP:  Pop culture and poetry risks being kitschy, but your journal seems to still publish a wide range of poetry. What kind of work are you guys looking for?

RS:  Our aesthetic is still evolving as recently we welcomed three new editors to our staff, but at it base, when we read a pop culture poem, we’re not looking for a wacky romp or a poem stuffed with Netflix titles just to sound poppy.   That’s not to say we don’t enjoy humor.  But what I appreciate as a reader are poems that tell me something about the speaker based on what they choose to write about, or scratch beyond the surface of the source material to reveal something deeper.   A couple of poems from past issues that spring to mind are Amorak Huey’s “This is NOT A Love Poem For April O’ Neill”,  Kayla Wheeler’s “Use Me Any Way You Wanna (after Tina Turner)”, and William Evans’ “Django Sonnet #3”. Or Danez Smith comes along and creates a new poetic form based on the TV show Moesha and does it brilliantly.   W. Todd Kaneko is doing some great work that engages pop culture (specifically pro wrestling; his book The Dead Wrestler Elegies is the book of love poems I wish I’d written).   The poems we champion range from funny to heart-wrenching, and that’s a mix we hope to maintain in the future.

SHP:  What are your backgrounds as writers/editors and how does it inform your choices as editors?

RS:  Well, you got the long version of my background earlier, but my editorial staff (Eric Morago, Grae Rose, Lauren Bullock, Dalton Day, Eirean Bradley, and Mikkel Snyder) are all poets who are largely performance poets as well as page poets (and making the distinction, I feel, is really the subject for an article or three, or maybe an AWP panel).   I think this informs their choices because whatever else one may say about the slam poetry scene, the best parts of it teach a writer to create an engaging narrative in a way that is compelling (and under three minutes out loud).   Add to the fact that we’re all proud nerds (in different ways—and I am of the camp that you can be a Beyonce nerd just as easily as you can be a pro wrestling nerd), and I think that when we sit down to read submissions, we’re looking at poems that move us in some way that also are so well-written they could be submitted to almost any journal and make it to print.


SHP:  What do you see for the future of FreezeRay?

RS:  The immediate future of FreezeRay is a print offshoot, unoriginally named FreezeRay Press, that expands the mission statement of FreezeRay the journal by offering books that marry pop culture and poetry in a smart and savvy way.  We’re putting out themed single-author chapbooks, a number of themed anthologies, and collections of pop culture work from online, specifically from the sites Black Nerd Problems and Cartridge Lit.

My pipedream is to keep putting out the journal (looking into a Best Of print edition in the future), get the press up and running, and use these to keep spreading the nerd gospel to poetry enthusiasts and to people who didn’t know they liked poetry.

Ultimate pipedream:  To be interviewed by either Nerdist or Marc Maron about this weird world we’re spotlighting.  I’m not picky, either podcast would do.


SHP:  Could you recommend a few of your must-read literary magazines on your book/virtual shelf and why readers should be reading them?

RS:  Drunk In A Midnight Choir is a brave new journal that has poetry, fiction, and op ed essays (poetry edited by FreezeRay’s own Eirean Bradley); many of the poets are also from that ever-shrinking crossover world of page and stage, and DIAMC is putting out some solid work regularly.

Cartridge Lit is a video game themed journal run by Joel Hans and Justin Lawrence Daugherty, and they’re putting some really exciting work, especially for someone like me whose relationship with video games is as strong now as it was when I played E.T. on the Atari 2600 (and I liked that game, so maybe that knocks down my cred a few notches).

Waxwing is one of my favorite journals aesthetically, both in poem choice and visually.  When I first dove into the literary world, there were so many new voices (to me) that I continue to seek out, or have since had poems published by us, and Waxwing is a consistent source of me discovering new favorite poets.

Also, the newly laid-to-rest HTML Giant not only had rad lit, but the best journal name ever.


SHP:  What's a day-in-the-life of an editor for FreezeRay?

RS:  Our submissions are read blindly via Submittable and subject to the “yes/no/maybe” voting system, so we give each submission a once-over and make our case for however we voted.  The easy yesses and definite no’s take care of themselves, but it’s the stuff that divides our votes that is the heart of how our aesthetic continues to evolve.  I am blessed to have a group of editors who are passionate and articulate about their choices.

Closer to launch time, I make the final cut (which is the most difficult part of wearing the editor-in-chief hat), and start assembling the issue.  I spend a lot of that time online looking for fan art to complement the poems chosen.  DeviantArt is a huge help there, because you can type something like “Undertaker 1991” and chances are someone will have created something super cool to fit that bill.   We also try to have at least one art spotlight, pop culture influenced, of course, so I’m always finding sweet visual artists whose work I want plastered all over my walls.  And then we put the thing out and get a little overwhelmed at the positive feedback.  Then I sleep.


SHP:  I'd like to ask a couple of pop cultural questions:  Marvel or DC?

RS:  Marvel for live action films and Lego games, DC for animated films, current TV shows, and the Batman: Arkham games.  But I recently bought a slew of Image comics on digital sale, and the work they’re doing even not counting Walking Dead is some of the groundbreaking work I’ve read in a while.

RS:  You’re asking a guy who had poems retweeted by Mick Foley and Paul Heyman, so my allegiance will always be with professional wrestling. I do enjoy MMA as well, and now that CM Punk has signed with UFC, my worlds are very happily colliding.


SHP:  What other projects are you working on?

RS:  FreezeRay Press is taking up most every waking moment of my life right now as I make the transition from being a guy who’s had books put out for him to being the guy who puts out books.  I’m also doing some writing for a wrestling website called Pro Wrestling Wire, where I hope to sneak in some poetry into the wrestling fan world as well.  I’m trying to stay writing as well, beyond livetweeting The Flash or Walking Dead, and hoping to get more work published in 2015 (but aren’t we all).


SHP:  Finally, what advice do you have to offer for young writers? 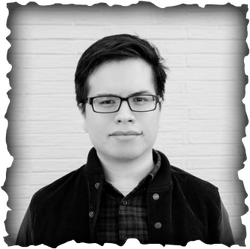 ​Sebastian H. Paramo's poetry has appeared in, or is forthcoming in Huizache, Storyscape, upstreet, The North American Review, Tampa Review Online, and elsewhere. He is an editor for the online journal The Boiler. He received his MFA from Sarah Lawrence College. His reviews and interviews have appeared recently in American Microreviews and Interviews. Currently, he wears many hats in Dallas as a teaching artist for Booker T. Washington High School for the Visual and Performing Arts, a curator for the Pegasus Reading Series, and as board member and communications assistant for WordSpace.