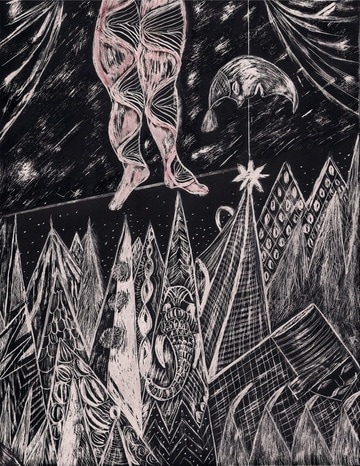 ​The hand says:  I did not plant that tree.

I did not heft the noose over its branch, test its weight.

My brown eyes say:  I did not see because it was so dark.

I did not see that man lying on the sidewalk.

My mouth forms the words:  I am not a racist or it is wrong.

Something in me is old.  It is not from this country.

Something in me is new.  It is American.  It is my heart.

My tongue says:  This is the only language I know.

My tongue says:  This is the only language I know.

My feet wonder:  Are we from the low country of America?

I can smell the ocean from my back yard.

My hair says:  I look like everybody I ever grew up with.

I look like everybody off the boat.  From the old country.

I could smell the ocean from over there too.  Many people,

mostly men, are angry at me, they say my new heart bleeds.

The fist says:  I am not burying anything with this shovel.

I am planting a tree.

Jennifer Martelli
Jennifer Martelli attended Boston University and The Warren Wilson M.F.A. Program for Writers. Most recently, her work has appeared in Rust + Moth, *82 Review, Sugared Water, and as a feature in Right Hand Pointing. Her chapbook, Apostrophe, was published in 2010 by Big Table Publishing Company. She lives in Marblehead, Massachusetts with her family, and is an associate editor for The Compassion Project: An Anthology.
​Mia Avramut is a Romanian-American writer and artist who worked in laboratories and autopsy rooms from Pittsburgh to San Francisco. Her poetry, prose, and artwork have recently appeared or are forthcoming in Prick of the Spindle, saltfront, The Knicknackery,Thrice Fiction, Conclave: a Journal of Character, Escape into Life, Santa Fe Literary Review, Petrichor Machine, Paper Nautilus, and several anthologies. She lives in Essen, Germany.