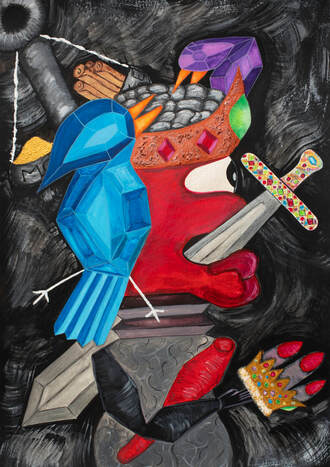 moses: descendent of an ocean bender ​by Jeremy T. Karn

'to the excellencies & officials of europe: we suffer enormously in
africa. help us. we have problems in africa. we lack rights as
children. we have war & illness, we lack food.’

it’s 8:34am this morning &
i am watching a CNN documentary.

‘africans drowning
in the atlantic ocean in quest to reach europe,’
that how it’s titled.

& it's the second year now since you left.

i imagine one day the sea will burst open
with the smell of you, hold its knees & cough out
what is remaining of your body that’ll long to return home.

of course,
the sea is the cemetery you'll be buried in &
the wet salty sand soaking between your toes
is what will remind me of you.

whenever i heard of Africans drowning
in the Atlantic,
i think of you - place my finger on your pictures;
looking for the softness of your flesh in them,
this is how i tried to retrace my footprints into our memories.

i have stopped watering my fear in losing you to an ocean,
& mama has gathered sea water in a jar & called it you.
Jeremy T. Karn writes from somewhere in Liberia. His work had appeared in the 20.35: Contemporary African Poets Anthology, The Whale Road, Ice Floe Press, Lolwe, Feral Poetry, The Kissing Dynamite, Rigorous Magazine, and elsewhere. His chapbook (Miryam Magdalit) has been selected by Kwame Dawes and Chris Abani (The African Poetry Book Fund), in collaboration with Akashic Books, for the 2021 New-Generation African Poets chapbook box set.
RowanArtC feels that the work should speak for itself and invites the viewers to go wild with their imagination. The world within us (random thoughts and emotions) is a rich spring of inspiration for her work.
​