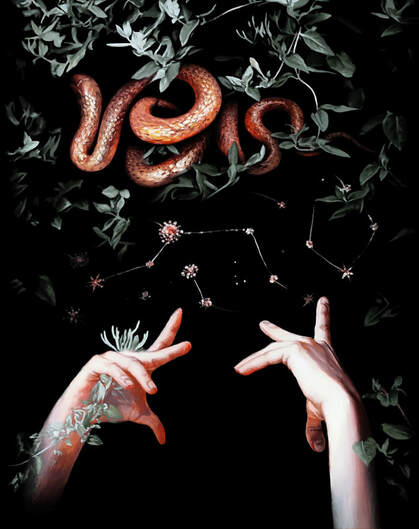 Phylogenetics
There was a lonely cabin,
Within a dark, old wood,

And in it, with her mother,
There dwell Red Riding Hood.

off her overcoat to reveal fine downy fur
The Old Man in the Tree
​Let’s begin before we are dead,

she sd, her first
memory was a

darkness, a story about

walking girls and time
that passed too slowly

and inside that time, in purple
light and twigs at sun-up, sat an

The first lesson
in fortitude against

weight in wind and solitude
against the calculation of

The rustling laughter, she wntd,
the hands like gnarled roots.

Passing by, you might mistake
a star for feeble eyes, arranging

stones and price tags in
exchange for departure.

One morning in front of the
tree and the man of stars,

a white-cheeked monkey
bit her hard

and sat down to his meal

on a nearby fence
against a sky

These days she still thumbs
the scar (forearm, right side)

she’s nervous around petty
men in positions of power.

Hidden manuals on how

to make a sacrifice of

the heart--a trivial thing
when you are so hungry.

She bartered early
one morning     and

said it out loud.

And we do not speak
when we are dead,

they say we do not
speak when we are dead.

Sharp, dull bang against
the still, still night of

Vietnam, 1975, when her leaves
began quietly turning in onto

And the corpses
were     forgiven
their fantasies

And the tree was
cut into     paper

And the TV sets were left out for good.

breath before the
quiet task of fate

And an old man somewhere high

was feeling satisfied with
his meal and his lodging and

won’t you come
out tonight,

and dance by the
light of the moon?
Jessica Q. Stark is a mixed-race, Vietnamese poet originally from California. She is a doctoral candidate in English at Duke University where she writes on the intersections of American poetry and comic books. She is the author of three poetry chapbooks, the latest titled Vasilisa the Wise (Ethel Zine Press, 2018). Her chapbook manuscript, The Liminal Parade, was selected by Dorothea Lasky for Heavy Feather's Double Take Poetry Prize in 2016. Her poems have appeared in Hobart, Tupelo Quarterly, Potluck, Glass Poetry Journal, and others. Her first full-length poetry collection, Savage Pageant, is forthcoming with Birds, LLC. She writes an ongoing poetry zine called INNANET. She is an Assistant Poetry Editor for AGNI.
​Nam Das (Filipino, b. 1989) creates open-ended visual stories by arranging figurative elements into an assemblage forming a central idea, an idea that plays around Jungian archetypes of the collective unconscious or mythologems observed throughout history. He uses a limited palette of four colors in his oil paintings. Also called the Zorn palette, it's composed of: Titanium White, Cadmium Red, Yellow Ochre and Ivory Black. Nam began working as a full-time painter in 2019.