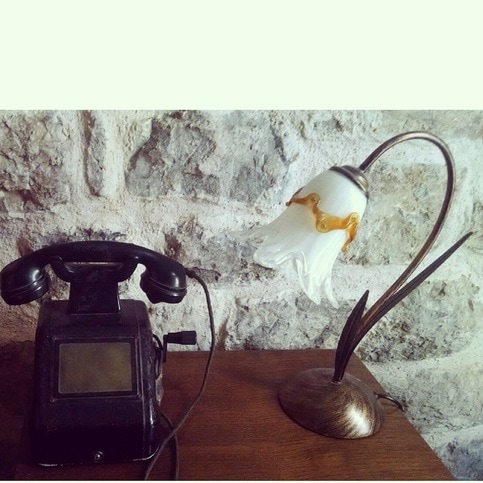 "phone and lamp" by Alyssa Yankwitt
One Last Supper
​
We eat around the painted black picnic table,
in the kitchen, kids on benches, Mom in her captain’s chair,
crossing legs, leaning back, drawing on a Pall Mall
(red), picking tobacco flecks from her lower lip, flicking

them toward the clay ashtray somebody made in 2nd or 3rd grade.
She waggles the unclasped buckles on the galoshes she wears
on her left dangling foot, squints against the smoke,
and, straight-faced, jokes: Well, Walt Clyde Frazier can’t hit

a basket to save his life so those Knicks ain’t going nowhere fast.
That makes Pat laugh. You don’t know what you’re talking
about, he says. He starts varsity, power forward,
fails every subject except industrial arts and geometry.

Mom shrugs, scoffs, then spits and coughs, and that
turns Pat sulky (our code for his dark mad moods) so when he rises to leave before dessert Mom stubs her butt, reminds
him he’s old enough to clear his place and now,

decades later, after he’s been dead so long, I only remember
his freckles, the length of his fingernails, the way his brown hair
curtained one eye, but I can’t recall whether he scraped
his plate or just let it slide into an overcrowded sink.