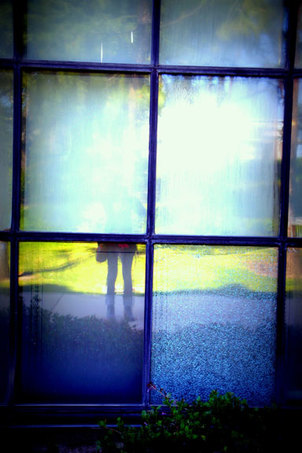 "Hoisted into Nothingness" by Tricia Louvar

Do you regret anything about last night? His body and especially his calves
are skinnier than mine. If I pushed him off the bed, he'd get lodged between the mattress
and the wall. Like a chewed-up tennis ball caught in the neighbor’s gutter,
a katamari – collecting broken earphones, left socks,
my bracelet from that flea market in Berlin,

which I might have actually left in someone else's bedroom. Do I regret anything
about last night? Not the foil-wrapped burrito, half-naked on the nightstand. The backing beats: raindrops on tin
awnings,
clinking bottles. The drunk texts to a different boy, I miss you, I want to see you, I wanna suck you off, I wanna
drink some more, swallow the summer, belch. Add my own
to the afterlives embodied in the San Francisco fog.

till the morning after. I don't regret anything. I won't for a while.
I just woke up, facing my roommate’s bed. There's a thunderstorm in my temples and a flash flood
rising in my throat. The pieces of last night are magnets.
They tug at my refusal to put them together. I try
to imagine my shoulder blades as mountains.
Julie Chen is from San Jose, California, and lives in Brooklyn, New York, where she works as a paralegal.
Tricia Louvar lives in the Pacific Northwest and studied journalism, poetry, aesthetics, and documentary photography in college and beyond. She works in publishing as a visual artist and writer. Her work has appeared in the New York Times, Los Angeles Times, Brevity, Orion Online, Zyzzyva, and more.  tricialouvar.com

​Artist Statement:  At a Saturday kaffeeklatsch, after splitting a piece of banana bread, I am the one nibbling pieces of its raw sugar left behind on the plate. Such an instantsummarizes my artistic impulses of focusing on the leftovers and the overlooked. I investigate the human condition and its relationship to impermanence with digital and analog tools.