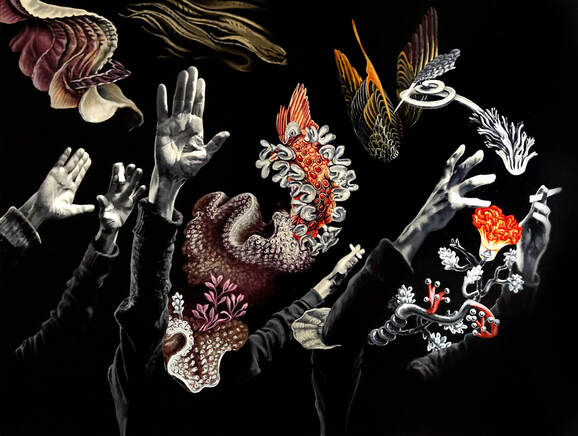 Flu Season
In the summer of 2014, hundreds of Memphis police officers caught the “blue flu,”and took sick days
to protest a reduction in benefits. Almost 40% of the City’s general fund is spent on policing.

It’s flu season and I’m sick of bills. It’s all
Destiny’s Child: bills, bills, bills. We have
armored trucks and SkyCops and no food.
We have body cams and no food and the body
cams are never recording. Have you ever been
denied so much you came down with a blue flu?
Have you ever been as blue as a jar of Blue Magic,
set of blueprints, a river filling with femurs, dull,
red kidneys? I’ve heard the cops started as a better
way to catch niggas. Somehow a person with no-
thing is always the most dangerous. How many
times have my taxes paid for riot shields
cliquing together like birds? How much over-
time occupies my block and its quiet? Look:
I lock the door when I’m sure no one’s coming.
I ask the ghetto bird, if only briefly, to wait. All my
life, I’ve been asking for a park. Fresh oranges
that don’t take 3 hours to bring home.
African Dodging while the President Eats Dinner in Philadelphia
for Oney Judge
Justin Davis is a first-year MFA student at the University of Memphis. He earned his BA from Rhodes College, where he received the Anne Howard Bailey Prize in Poetry. A 2018 Pushcart nominee, his writing has been published in Apogee Journal, Freezeray, Glass: A Journal of Poetry, BOAAT, and decomP.
​Nam Das (Filipino, b. 1989) creates open-ended visual stories by arranging figurative elements into an assemblage forming a central idea, an idea that plays around Jungian archetypes of the collective unconscious or mythologems observed throughout history. He uses a limited palette of four colors in his oil paintings. Also called the Zorn palette, it's composed of: Titanium White, Cadmium Red, Yellow Ochre and Ivory Black. Nam began working as a full-time painter in 2019.