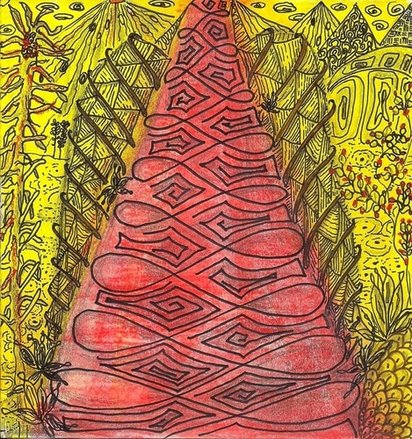 "Cinnabar Bridge" by Mia Avramut
Nat Love's Slow Night on the Pullman
​
“to the cow-boys, rangers, scouts, hunters and trappers and cattle-men[. . .] I extend the hand of greeting acknowledging the FATHER-HOOD of GOD and the BROTHERHOOD of men; and to my mother's Sainted name”--from his autobiography, The Life and Adventures of Nat Love.

Mother, I’m sipping again
homemade wine.
You hid in our master’s garden
a full demijohn, thinking it secret.
But Sally and Jordan found it
and the way we attacked that wine
was a caution to the Temperance Workers,
an oyster can for a cup,
you found us, dead drunk
lying in the sweet corn,
and carried me inside,
but left Sally and Jordan to sleep in the corn.

What would the boys
on the Duval Ranch say
about Red River Dick tonight,
who never missed
the woolliest ones
and slept often in the rain?

Here he sits in high style:
A long night and an empty Pullman car,
high backed seats and running water,
oil lanterns and mahogany.
Hot air blowing from the floor;
no fire to tend!
As jobs go, this about takes the prize.

And Yellow Dog’s tribe, who captured me
and pierced my ear with a tiny bone,
what a night we’d have
if you could share this car,
forgive me that pony I stole
-- kept him five years and fed him well.
Maybe I’d marry that pretty girl this time.
We were all just hoping for
better days.

Justin L. Blessinger
Justin L. Blessinger was raised in northeastern Montana on the Fort Peck Sioux and Assiniboine Reservation. His writing often draws upon the strange tension between the remoteness and ferocity of life "out West" and the temptations and challenges of life in the rough-and-tumble reservation town of Wolf Point. Winner of the 2008 Doug Fir prize for fiction, he publishes both fiction and poetry, and his work has recently appeared The Bear Deluxe Magazine, South Dakota Review, New Tricks, and in an anthology of writers of Generation X, In Our Own Words. He lives in Madison, South Dakota, with his wife, Christina, and their two dangerously inquisitive daughters.
​Mia Avramut is a Romanian-American writer and artist who worked in laboratories and autopsy rooms from Pittsburgh to San Francisco. Her poetry, prose, and artwork have recently appeared or are forthcoming in Prick of the Spindle, saltfront, The Knicknackery,Thrice Fiction, Conclave: a Journal of Character, Escape into Life, Santa Fe Literary Review, Petrichor Machine, Paper Nautilus, and several anthologies. She lives in Essen, Germany.