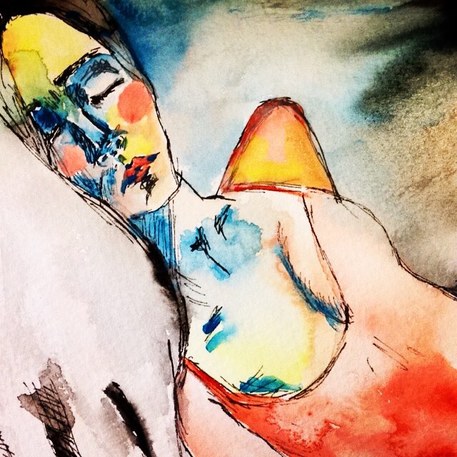 "After" by Janelle Rainer
Sick Trees

The last time I told my husband I could feel a seizure coming on--sudden gastro-lurch, tinny
haze of déjà vu—he breathed out so heavily you’d think I was asking him for money.

He is tired of muscling me down. I wish I could witness him soldiering, his long body
a shield for my own. But I am always somewhere else, just outside the room,

my back to the violence. The morning after, I found him purple-lidded and squatting
in the backyard, palming a cracked pecan. He said the tree was sick,

could tell by the way the nuts fell, still green and spotted dark velvet. It’s not right
for me to compare myself to this tree, but none of this is: the almost-well evil of it,

the honey-long weeks we sleep like milk-drunk babes made bitter by the blot
of what was always there, waiting. When it happens, he says he tugs my name

to pull me down. I want to know where I’ve been. I want to be there
when he cuts the tree down, to face that scar in the earth.
KATE CLICK is an MFA student of Poetry at Oklahoma State University where she works as an associate editor for the Cimarron Review. Her work has been published in the Apalachee Review and Anomalous Press, and she is the winner of an Academy of American Poets prize.
JANELLE RAINER is a poet, painter and teacher living in the Pacific Northwest. Janelle worked as a soda fountain waitress, peach orchard laborer, and shoe salesman before earning her B.A. in English from Whitworth University, followed by her M.F.A. in Poetry from Pacific University. Janelle’s poetry has been published in numerous journals, including Harpur Palate and The Louisville Review, and her paintings have been featured in venues in and around Spokane, Washington. Her debut poetry collection, Two Cups of Tomatoes, was released in October 2015.