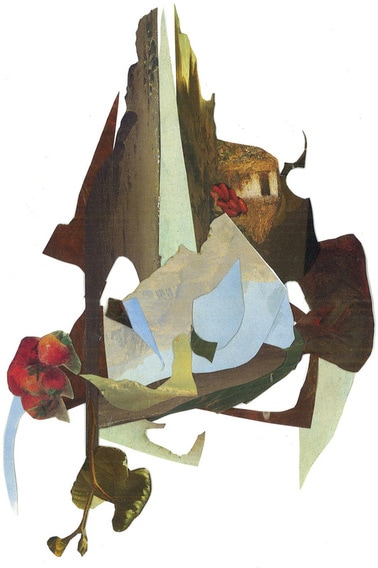 "If I Embrace You, You Won't Move" by Shell Myer
A Student Reacts to Sharon Olds' "Sex without Love"


Elliott stands in front of the class
in his army-green hoodie and jeans,
holding his artistic rendition of "Sex
Without Love" – unopened condoms taped
to a piece of construction paper. "I picked this poem
‘cause I thought it was funny. For the ink,
I used latex paint. And I cut out pictures
from my roommate's Penthouse." The class titters.

"Ok," I say. "What is it about the poem
that amuses you?" He smirks, "It says
their faces are like steak. So it must be ok
to look at people like pieces of meat, right?"

Somehow I need to turn this into a lesson
on interpreting images, even though
the only image I'm seeing right now

is myself at Elliott’s age, balancing on one foot
while shoving the other into the leg of my jeans
in the sickly-yellow light of more than one
morning after, trying to feel proud of what
I told myself were "conquests," but unable to forget
their fingers, rough with oblivion
and selfishness, their migrations to the opposite side
of the bed, their words in the morning – barely
a mumble. And later, on campus, a quick nod.

I can tell Elliott is that kind of guy -
on the first day of class, he reclined in his chair
in the back of the classroom, legs
stretched in front of him, eyes on each girl
who walked in – lingering on some,
dismissing others. I wonder if he'll ever learn

what I learned from Justin one cold night
in May. He took me home with him
after last call at the bar. He left
his bedroom window open all night, and later
I awoke in the dark, clutching only a sheet

to my chin. I kept my eyes closed
when he slid out of bed, expecting
him to walk to the kitchen for water. Instead
I heard him open and close his dresser drawer,
felt the weight of another blanket
before he slipped back into bed.

I never saw him a second time. I don’t recall much
about the way his body moved, or how long
he lasted, but these things have stayed
with me: his arm around my shoulder,
my head on his chest, the glass of water
he brought me in the morning without being asked,
the gentle heaviness of blanket. Oh

Elliott, I hope eventually
you'll understand sex without love
doesn’t have to mean pleasure without affection,
doesn’t have to mean taking
without giving.
Kate E. Schultz earned her MA from Ohio University, where she also served as Assistant Editor of New Ohio Review. Her work has appeared in Bayou Magazine, Midwestern Gothic, and others. She is Associate Editor of Sow's Ear Poetry Review, as well as Disability Services Advocate at Columbus State Community College.
Shell Myers was born in Elyria, Ohio, but now calls Philadelphia their home. They are a queer multimedia artist, voted most artistic in the 8th grade. They are passionate about emotional sensitivity, play, and subverting toxic masculinity. Shell is the Administrative Coordinator of Art & Art History at Drexel University. When they're not putting in that 9 to 5, they make time to create collages, paintings, photographs and drawings. You can find more of their work at www.shellmyers.com