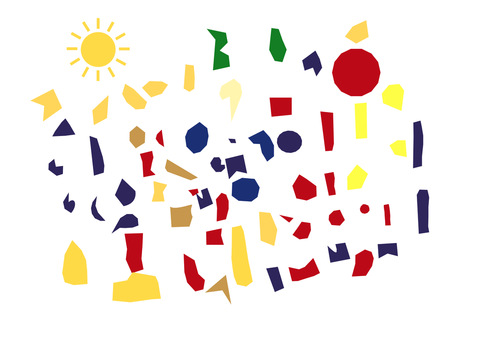 "Untitled" by Tom Harding
When Wellsville answered The Call


after The Adventures of Pete and Pete

That fall, the memory of our own hottest
day was short; the quick leap from June

it stroked the backs of our legs, made us itch,
so as we watched we could smell melting blacktop,

feel dread emanate from a phone booth. I wondered
where we could find the Strongest Man in the World

when we needed him, or why none of the dads in real life
were played by Iggy Pop. This oddity beamed out

from my TV, and took the sting out of school,
out of what went on when backs were turned.

This would be the last decade I loved summer, full
before the heat-haze of remembrance, like using the final

hour of Daylight Savings as a time machine,
like the answer to a call that won’t stop ringing

even after someone finds
the courage to pick it up.
KATE GARRETT was born thirtysomething years ago in southwestern Ohio, but moved to the UK in 1999, at the tail end of her teens. She looks back a lot, and often in anger. Her latest poetry chapbook, The Density of Salt, is out now from Indigo Dreams Publishing.
TOM HARDING lives in Northampton UK where, when not working, he writes poetry and draws. Tom has been published in various places including Parameter Magazine, Identity Theory, Unlikely Stories and Nthposition. He also maintains a website of his own work at tomarianne.net.